Or, how to build artificial molecules 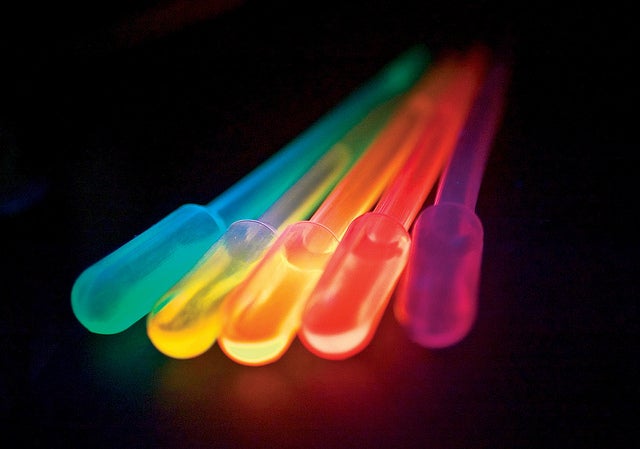 Taking cues from DNA research, photosynthesis, and nanotechnologies, a team at the University of Toronto has engineered a new kind of “artificial molecule” that can be assembled into wholly new classes of nanomaterials, including one that can direct and control energy absorbed from light. They’ve basically built a self-assembling antenna for light out of quantum dots that could lead to wholly new ways of manipulating and harvesting light energy.

Quantum dots are those tiny pieces (like, nano-tiny) of semiconductor that can be customized to efficiently absorb and emit light in finely-tuned ways. They are interesting little particles, but thus far scientists haven’t really found a good way to coax different kinds of quantum dots into forming complex structures.

That’s really the major breakthrough here. Mashing up their knowledge of DNA and semiconductors, they devised a way to get these quantum dots to self organize. Says Ted Sargent, U. of Toronto professor and one of the research leads, in a press release:

The credit for this remarkable result actually goes to DNA: its high degree of specificity – its willingness to bind only to a complementary sequence – enabled us to build rationally-engineered, designer structures out of nanomaterials. The amazing thing is that our antennas built themselves – we coated different classes of nanoparticles with selected sequences of DNA, combined the different families in one beaker, and nature took its course. The result is a beautiful new set of self-assembled materials with exciting properties.

Just like radio antennas, the materials gather their medium–in this case light rather than electromagnetic wave–and increase the amount that is absorbed, channeling it to a single site within the structures where it can be concentrated. Plant leaves already do this and have been doing it for millennia, but this is the first time researchers have finessed nanoparticles into assembling themselves into similar structures. The result is a completely new generation of materials that potentially possess completely new applications.