Mice Engineered to Lack Muscle Contraction Gene Have Superior Endurance (and Humans Might, Too)

Around mile 10 of a recent half marathon, my quadriceps started to tighten and my feet increasingly felt like lead.... 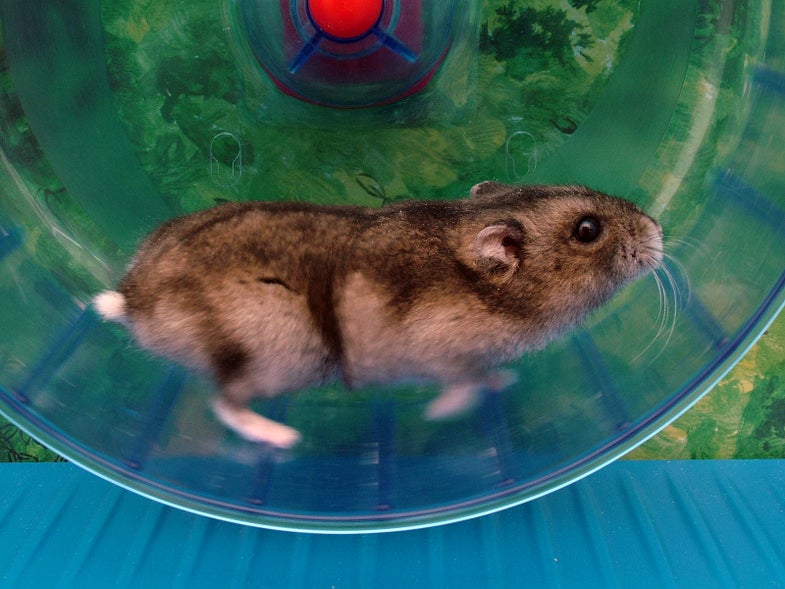 Around mile 10 of a recent half marathon, my quadriceps started to tighten and my feet increasingly felt like lead. Along with improving my training, perhaps in the future I will use zinc-finger nuclease scissors to snip out a gene called IL-15Rα, so I can run long distances with ease.

Mice that lack this gene, which is related to muscle contraction, can run much farther than their counterparts, a new study says — suggesting a genetic predisposition to endurance in some athletes.

Physiologists led by Tejvir Khurana at the University of Pennsylvania were studying IL-15Rα, which had been linked to proteins associated with muscle contraction. They engineered mice to lack that gene, and recorded the mice’s activity. Every night, the knockout mice ran six times farther than normal mice, according to the Science NOW blog.

The team dissected the muscles in these marathon mice, and found the muscles had more fibers and more mitochondria, the power plants of cells, Science NOW reports. This meant the muscles took longer to tire and longer to use up their energy supplies. The researchers found that the lack of IL-15Rα coaxed one type of muscle cell to turn into another type — from fast-twitch, easily tired muscles into slower-contracting, longer-endurance muscles.

It turns out that endurance athletes also have IL-15Rα variations, which might help explain their stamina. Khurana et. al worked with some Australian researchers to study genetic samples from Olympians and other world-class athletes, and found certain genetic variants were more common in long-distance athletes than in sprinters, for instance.

The research is reported in the Journal of Clinical Investigation.

More work must be done to explain why the IL-15Rα knockout mice had such a proclivity for physical activity — no one coaxed them to run six times longer than their friends, they just did. So it’s not clear whether a lack of IL-15Rα made them hyperactive as well as tenacious. But “the work raises the possibility that drugs blocking IL-15Rα could one day enhance endurance,” Science NOW reports.

Until then, looks like I will just have to keep training.