Metamaterials to the rescue once again 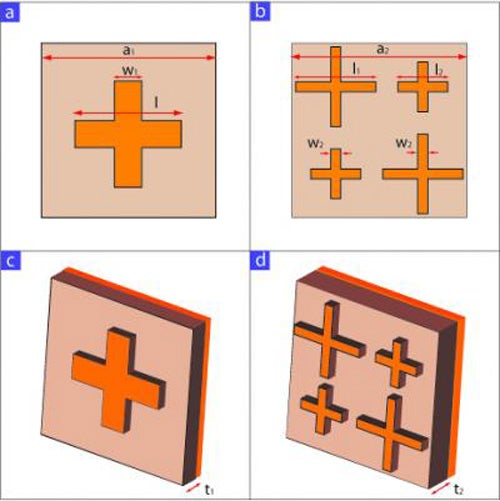 Metamaterials as a class get a lot of press for their ability to exhibit a negative refraction index, the characteristic that lets them bend light around a space or object (the much ballyhooed “invisibility cloak”). But designer metamaterials have potential reaching far beyond just visible light. They can be customized to have all sorts of tailored responses to radiation, and thanks to a Duke University research team, one of those responses could have a huge impact on thermophotovoltaics and other energy conversion schemes.

The team has demonstrated the ability to use metamaterials to engineer emitted “blackbody” radiation with an efficiency that surpasses the natural limits that should be imposed on the material by its temperature. In English, that means better energy conversion efficiency in things like photovoltaics and possibly waste heat harvesting.

A “black body” is an idealized material that absorbs all radiation that strikes it regardless of wavelength. It also emits that energy based on the material’s temperature. Black bodies don’t exist in nature, which is too bad because they are really efficient, in that they achieve a kind of equilibrium. What goes in as electromagnetic radiation comes out as thermal radiation (or “blackbody radiation”). Ideally speaking.

What the duke team has shown using metamaterials–man-made materials not found in nature–is that they can tailor that blackbody radiation in various ways, including in ways that defy the efficiency that a material would have naturally. Put another way, there is a natural limit on the radiation a given material can emit, and that limit depends on the material’s temperature. But the Duke team has shown its metamaterials can emit radiation at efficiencies beyond what nature says they should be able to (more detail on the science behind this hereand here).

The takeaway: a new class of metamaterials could lead to technologies that can harvest waste heat from industrial processes or other heat emitters at unprecedented efficiencies (read: efficiencies that actually make such energy harvesting schemes worthwhile). Or they could lead to thermophotovoltaic cells that can tailor the emitted photons to match the band gap of the semiconductor on the cell, making energy conversion far more efficient.