Why Sex With Creatures from the Future Is a Bad Idea 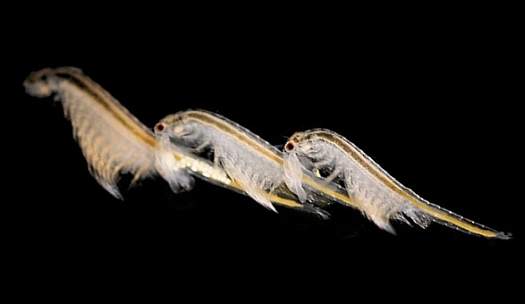 When time travel finally becomes possible, we might want to think twice about getting it on. According to a new study on tiny shrimp (Artemia franciscana), sex with partners from a different time could kill you.

Researchers at the Center for Functional and Evolutionary Ecology (CEFE) in Montpellier, France, collected preserved brine shrimp eggs from various generations, and then reanimated them with water. Nicolas Rode and colleagues mated pairs of brine shrimp that had been reanimated from eggs preserved since 1985, 1996 and 2007, a period representing roughly 160 generations. They found that females that mated with males from the past or future died off sooner than those that mated with their own generation. The longer the time-shift, the earlier they died: The 22-year time difference shortened female lifetimes by 12 percent; the effect was 3 percent for the 11-year time-shift.

Interestingly, this didn’t affect the females’ reproductive success. Those that lived shorter lives produced the same average number of offspring, they just did it at a faster pace. “Females’ life histories are complex and are constantly adjusted,” explains study co-author Thomas Lenormand. These adjustments reflect the trade-offs between survival and reproduction in nature.

Brine shrimp are part of an interesting class of animal whose eggs can survive decades of drought in a form of dormancy known as cryptobiosis. Once the eggs are reintroduced to water—either in nature or in the lab—they hatch. The species therefore makes an ideal subject for a time-traveling experiment like this one.

What makes time-shifting sex hazardous to health is something called antagonistic coevolution, a way that different species (parasites and hosts, for example) or members of the same species (males and females) adapt to each other to promote their own individual reproductive interests. In nature’s sex wars, males campaign for more offspring—the proverbial seed-spreading—while females play hard-to-get because they bear most of the burden of reproduction and parenthood.

Evolutionary biologists say these conflicts are common in nature, and could occur either as an arms race, with each side’s weapons getting bigger and better, or as a fluctuation, where the two sides take turns dominating each other over time with novel adaptations.

If males and females coevolve their sex organs in tandem, mating with a partner from a different time could leave you unprepared—sort of like heading into modern war with 17th-century armor. The brine shrimp experiment shows just this.

Unfortunately, the researchers couldn’t determine whether there were arms-race-style or fluctuation-style adaptations at work in this experiment. They’d need a longer time-shift to figure that out, which would test the limits of brine shrimp cryptobiosis. They also don’t know what traits made the time-shifting males more deadly. Lenormand and Rode say they’d like to investigate these traits in the future. It could have something to do with amplexus, in which male brine shrimp grasp their partners for hours or even days after sex to keep them from mating with others. A byproduct of this so-called mate guarding is that the females can’t feed, which could shorten their lifetimes. The researchers would also like to flip the experiment on its head, studying the effects of time-shifting sex on males instead of females.

So what does shrimp sex have to do with us? Sexual conflicts and antagonistic coevolution are “probably central to understanding male/female behavior,” Lenormand says. In fact, it turns out that antagonistic coevolution is hard at work in humans today. I’ve previously written about the possible antidepressant properties of seminal fluid. But there’s a dark side to semen, too. Gordon Gallup, an evolutionary biologist as SUNY Albany explained it thus:

“At the level of semen chemistry and vaginal chemistry, there’s competition. The vagina is a very hostile environment for sperm. When a female is inseminated, the presence of the semen triggers an immune reaction, so semen—and particularly the sperm—are treated as pathogens. Male seminal plasma contains all kinds of chemicals that are designed to take this into account. Seminal plasma is alkaline, and a couple seconds after ejaculation the pH of the vagina approaches neutrality, which makes it a friendly environment for sperm. Sperm also contains a lot of immunosuppressants that suppress the female’s immune system and counteract this immune reaction to semen.”

And thus the battle of the sexes rages on.