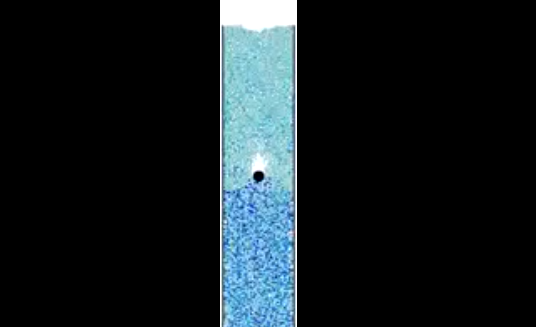 A team of Mexican and Cuban researchers have made a somewhat mind-bending discovery. They’ve shown that objects crashing through a granular medium don’t necessarily lose energy and come to a stop, as you might expect, but can attain a terminal velocity and continue sinking indefinitely into the material. It’s a property that has never been observed or, to the researchers’ knowledge, even predicted before.

Specifically, the team used a set of 18 weighted ping-pong balls ranging from 15 to 182 grams (that’s not even a half-pound at the high end), and launched them into a large tube filled with polystyrene beads. One would imagine, normally correctly, that a ball would enter the polystyrene medium and begin to lose velocity via friction and the beads’ resistance to the force of the ball, eventually coming to a stop depending on how heavy it is and its velocity upon impact.

But it turns out that this is not a universal rule. We know that objects falling through a fluid can reach a terminal velocity because molecules in fluid move aside easily under an applied force. Granular materials don’t share this property; their grains don’t move as easily under an applied stress. This is why bocce balls don’t sink straight into a sandy beach and why meteors that impact planets or moons covered in a granular crust rapidly still stop at a relatively shallow depth.

But in their study, the ping-pong balls that surpassed a certain critical mass–in the case of their granular polystyrene medium, this mass was about 82 grams–traveled all the way to the bottom of the tube. Moreover, their velocities leveled off, reaching a constant velocity just as they would if falling through a fluid.

Through simulations, the researchers showed that the heavier balls would fall indefinitely through the granular medium if they were allowed to. From a physics standpoint this actually makes some kind of sense, though it seems to run counter to intuition. We think of things losing energy in granular media because they usually do. In order to hit that terminal velocity, the upward drag force and the pull of gravity (dependent on the objects mass) have to balance. This is why mass is critical, and why we don’t tend to see this in the natural world.

For instance, in order for a weighted ping-pong ball to fall indefinitely through the sand of an average beach, it would need to weigh about 31 pounds. That requires a really dense material, denser than we find on this planet. More details for the curious via PhysOrg below.