Cosmic explosion was not a typical gamma-ray burst 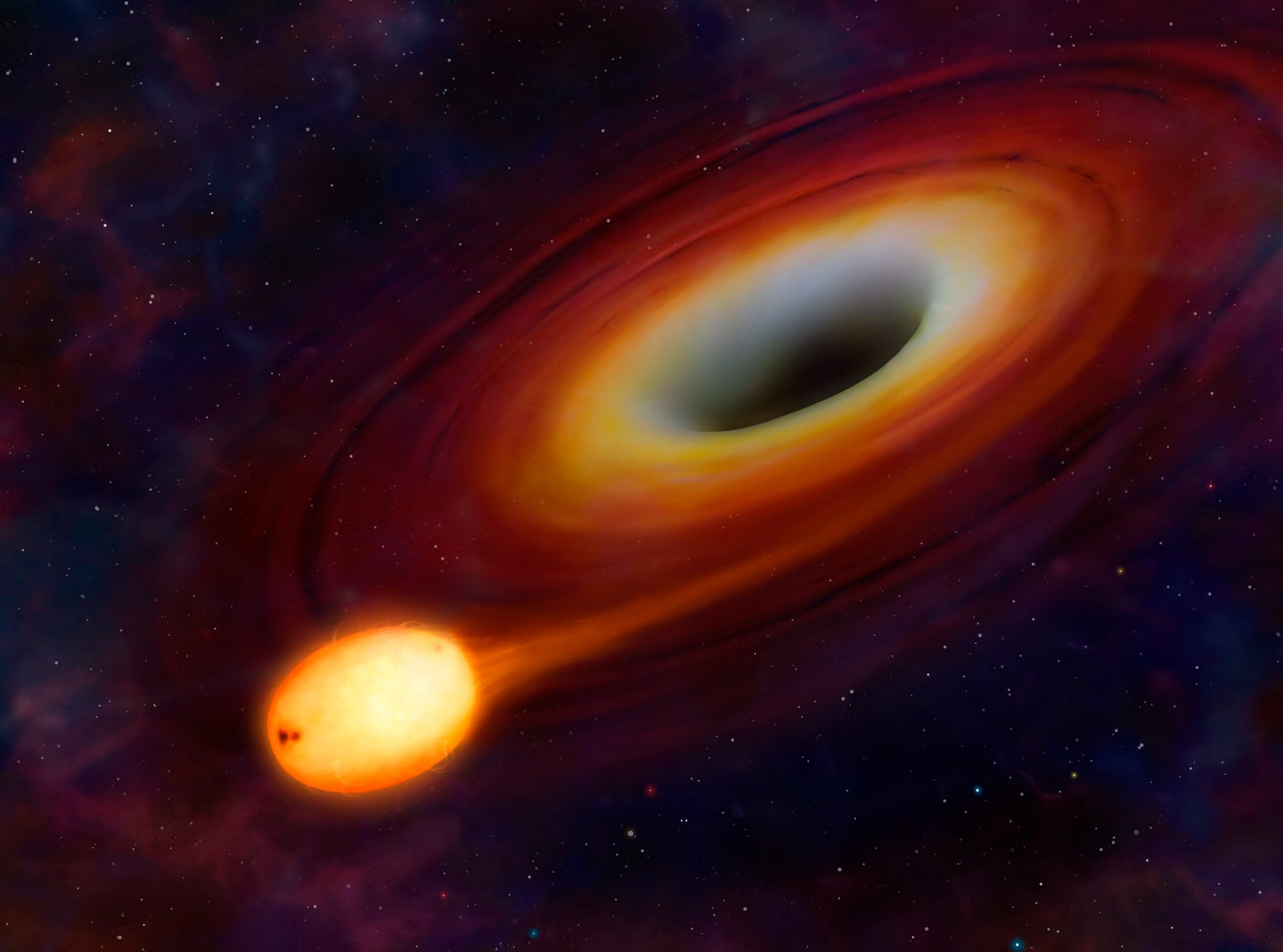 Astronomers have solved the mystery of a gargantuan cosmic explosion first spotted in March: A black hole did it, by killing and eating a star the size of our sun.

A couple months ago, we told you about an unusually bright and long-lasting blast of energy emanating from the center of a galaxy 3.8 billion light-years away in the constellation Draco. At first, astronomers thought it was a gamma-ray burst from a collapsing star, but when it kept shining in a variable pattern (brightening and fading) scientists realized it wasn’t your average GRB.

Astronomer Joshua Bloom at the University of California-Berkeley suspected it was a high-energy jet produced as a sun-sized star fell into a black hole and was torn to pieces. Bloom and researchers from several other institutions in the US and UK started analyzing data from the Swift Gamma Burst Mission, which first spotted the blaze of glory, as well as the Hubble Space Telescope, the Chandra X-ray Observatory and the Keck Observatory. Their analysis confirmed the theory, and was published Thursday in Science Express.

As tidal forces tear the star to pieces, some of the star’s mass is turned into energy. Some of that energy radiates as x-rays and gamma ray jets that spew from the swirling disk of star guts. The variable brightness is the result of new flares that occurred as more chunks of the destroyed star fell into the black hole, researchers said. Earth happened to be directly in the path of one of those gamma ray jets, which is why it looked so incredibly bright, scientists said.

By the way, this is still going on, more than two months later. Most star-death events last a matter of hours or maybe days, not weeks or months. (This star really died about 3.8 billion years ago.)

The black hole in question has a mass about six or seven times that of the sun, but that’s not really that big in terms of active galactic nuclei. Massive black holes, as compared to supermassive black holes, can quietly munch on gas for long periods of time, and roar to life when something wanders too close. That seems to be what happened here, Bloom said in a Cal news release.

“Here, you have a black hole sitting quiescently, not gobbling up matter, and all of a sudden something sets it off,” he said. “This could happen in our own galaxy, where a black hole sits at the center living in quiescence, and occasionally burbles or hiccups as it swallows a little bit of gas. From a distance, it would appear dormant, until a star randomly wanders too close and is shredded.”

This is a very rare event, and it’s even more unlikely that Earth would get such a great view, Bloom said — probably once in 100 million years in any given galaxy.