Researchers Sequence Tasmanian Devil Genome in Effort to Save the Species

Scientists hoping to save the Tasmanian devil from the strange and contagious cancer known as Devil Facial Tumor Disease (DFTD)... 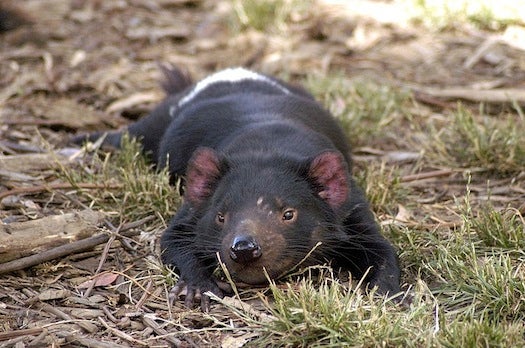 Scientists hoping to save the Tasmanian devil from the strange and contagious cancer known as Devil Facial Tumor Disease (DFTD) have turned to genomics to help them save species before the disease wipes it out completely. Researchers have conducted whole-genome analyses of two Tasmanian devils to develop a model by which to select healthy specimens to be kept in captivity so that the species might carry on.

DFTD is pretty nasty stuff and has only emerged as a killer of Tasmanian devils in the last fifteen years, but the effects have been widespread and disastrous. The disease disfigures the victim, which usually dies form starvation or suffocation due to massive facial tumors that impede its ability to get by in the wild. Worse, the disease is easily communicable, spreading through biting, mating, even simple touching.

The scheme hatched by scientists involves keeping a population of Tasmanian devils in zoos and other facilities where they won’t be in contact with wild Tasmanian devils–and therefore will be quarantined from the disease. Once DFTD has run its course, the captive populations could be reintroduced into the wild and allowed to repopulate their native island.

But researchers didn’t want to simply grab a sample of devils at random–that could inadvertently limit further the already limited genetic diversity of the overall devil population, possibly with adverse effects. So the team took two devils–one from the extreme northwest and another from the far reaches of the southeast to represent geographic diversity–and sequenced their genomes.

From that genetic analysis the researchers created a model that represents the range of genetic diversity currently on the island, and helps them determine which specimens should be selected for captivity based on the objective of maintaining complete genetic diversity should the wild population collapse completely. Further, they sampled the genetic makeup of genomes secured from museum samples of devil specimens dating back more than two centuries to see how much genetic diversity has changed since humans first arrived on Tasmania (somewhat surprisingly, the change over the last century been minimal).

The idea isn’t just to preserve the species in captivity, but to preserve it with the exact degree of genetic diversity it has in the wild now–in other words, to manipulate nature while keeping it on its natural genetic course as much as possible. If the plan works, it could be extended to other endangered species as well.