In A Quantum First, Light Is Created From A Vacuum

In what may be a landmark experimental proof of quantum mechanics, a group of researchers from Chalmers University of Technology... 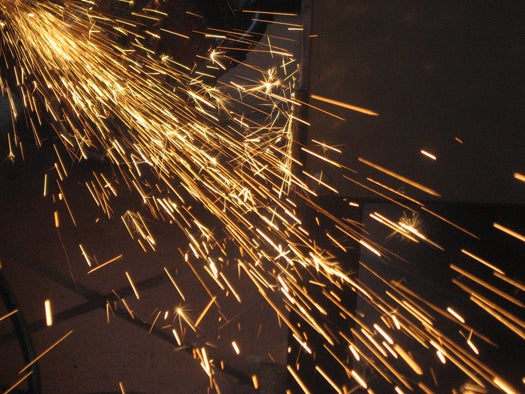 In what may be a landmark experimental proof of quantum mechanics, a group of researchers from Chalmers University of Technology in Sweden is claiming to have created sparks in a vacuum.

According to quantum theory, empty space is, well, not that empty after all. Rather it is full of virtual particles – particles that quickly blip in and out of existence. Theory states that a mirror can absorb energy from some of these virtual photons, and re-emit it as actual photons. Of course, this only works if the mirror is traveling through the vacuum at nearly the speed of light, making it difficult to prove, to say the least.

Per Delsing and his team of physicists worked around this by using something called a superconducting quantum interference device, or SQUID. The SQUID, which is very sensitive to magnetic fields, acted as a mirror in the researchers’ superconducting circuit. They passed a magnetic field through the SQUID, switching the field’s direction a few billion times per second, which caused the SQUID to move back and forth at about 5 percent of the speed of light. Microwave photons were then observed. Consistent with the theory, the frequency of the released photons was about half the frequency of the mirror’s wiggling.

The researchers aren’t talking about their findings until their work has been peer-reviewed, but they will be presenting at a workshop next week in Italy.