Ring of Laser Light Can Count Individual Viruses and Nanoparticles

Researchers at Washington University in St. Louis have turned an acoustic phenomenon familiar to those who have visited the Statuary... 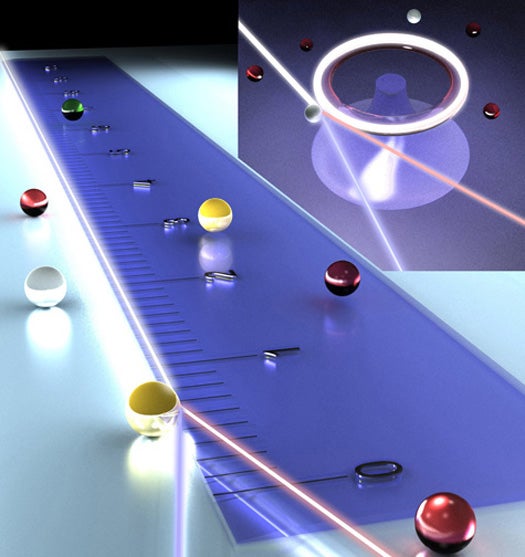 Researchers at Washington University in St. Louis have turned an acoustic phenomenon familiar to those who have visited the Statuary Hall in the U.S. Capitol Building or St. Paul’s Cathedral in London into a high-resolution nanoparticle detector. Using a ring-shaped micro-laser, the sensor can detect and count individual viruses or synthetic and biological nanoparticles with single particle resolution.

The sensor is what’s known as a “whispering gallery resonator” and relies on the same principles as those acoustic spaces (like the aforementioned Capitol and cathedral galleries) where whispers on one side of the room can be heard directly on the other side thanks to the unique properties of the shape of the space. But unlike the acoustic spaces (which are usually in round, domed spaces) that have audible sweet spots, the new sensor has optical sweet spots.

There’s a lot of optical science that goes into this, and we’re not going to get bogged down too deeply in it here (there’s plenty more science via the link below), but essentially it works thusly: A micro-laser beam no larger than a pinprick is generated in a small ring. When particles land on the microlaser it disturbs the frequency, and those changes in frequency can be measured to identify and count the number of particles present.

The sensor can tally up to 800 nanoparticles before the signals become too noisy to be accurate. It can even sense underwater. Or, ostensibly, in blood.

Near term, the new nanometer scale laser sensors–which the researchers claim are orders of magnitude more sensitive than previous passive resonators–will be deployed as environmental sensors capable of monitoring for chemical changes in air or water. But the team wants to engineer them to detect DNA and other biological molecules individually.