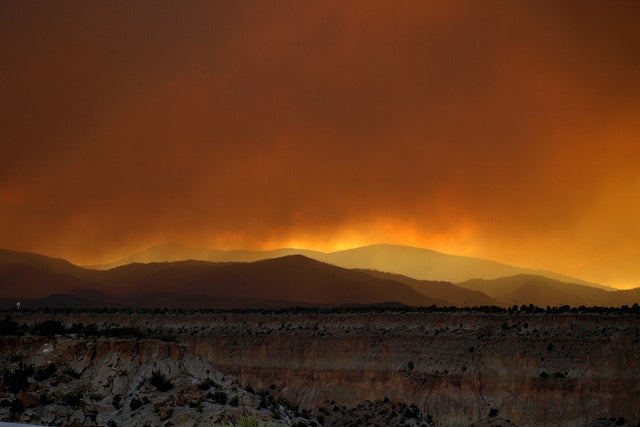 The wildfires burning in across the Southwest have threatened homes, economies, and communities, but today the Las Conchas fire in New Mexico is taking the threat to a new level. Having already ravaged about 60,000 acres, the wildfire is knocking on the door of Los Alamos National Labs, the birthplace of the atomic bomb and a key nuclear weapons research site.

In other words, there’s some nuclear material on premises, and the premises are somewhat besieged by the fire. The lab itself has been closed to all but critical personnel until Thursday as the fire skirts the boundaries of the facilities. At one point the flames actually crossed a state road and burned about an acre of the laboratory grounds.

But state fire officials and Los Alamos spokespeople say all nuclear and hazardous material is secured in concrete and steel vaults, and that the fire itself poses no real threat to those materials. These assurances did not stop the very same authorities from calling in teams to man its 60-plus AIRNET monitoring stations designed to alert the lab to any outside contamination coming from the lab grounds. Los Alamos’s lab director called it a precaution.

And it very likely is just a precaution, as Los Alamos is understandably a very secure facility. But that doesn’t mean America’s premier nuclear laboratory will be unaffected. Research there may have to be suspended if firefighters can’t get a handle on the wildfire threatening the nearby town of Los Alamos. Many of the lab’s 11,800 employed personnel live in the town, which has already been evacuated. If a large number of homes are destroyed, it could disrupt day-to-day operations at the lab for the foreseeable future.