At Japan’s Environment Ministry offices, the employees conform to a new energy-saving dress code known as Super Cool Biz (what,... 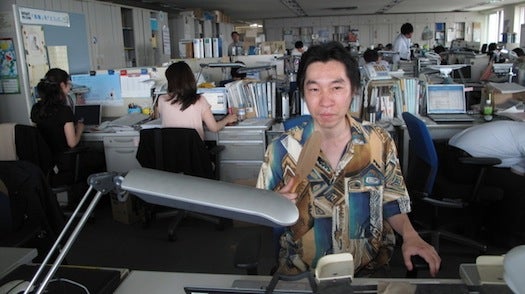 Koji Nakamura, who works in the Environment Ministry, says he thinks he could have been fired for wearing such a shirt last year. This year, he has become the ministry's poster boy for the Super Cool Biz energy-saving campaign because of his flamboyant style.
SHARE

At Japan’s Environment Ministry offices, the employees conform to a new energy-saving dress code known as Super Cool Biz (what, you have a better name?). Super Cool Biz (which I will refer to by its full name as often as possible, for obvious reasons) is an effort to tamp down Japan’s skyrocketing energy consumption, largely through cutting out excess air conditioning–and the hotter offices required a change in the traditional Japanese dress code, from full suits to eye-catching and naturally cooling Hawaiian shirts.

Pioneered by Masahiro Sato, the Environment Ministry’s Super Cool Biz actually incorporates a few different tactics to lower energy consumption. Lights are dimmed if used at all, half of the elevators have been shut down, and instead of pumping notoriously energy-hungry air conditioning throughout the building, Super Cool Biz mandates open windows and an internal temperature kept at a balmy 82 degrees.

Of course, 82 degrees is pretty toasty, and so Super Cool Biz allows for a much looser set of dress guidelines for the employees following it. Polo shirts, Crocs, and Hawaiian shirts apparently make up the majority of the employees’ outfits, which coincidentally would allow them to easily blend in at Disney World or any of the American east coast’s more tourist-clogged beaches.

It sounds like a bit of an uphill battle for much of the country; NPR interviewed a few other Japanese people about the prospect of wearing a pink-flamingo-emblazoned Hawaiian shirt at work and found some stiff opposition. One man was “horrified” (though through his horror he managed to “flash the label of his fancy Italian suit”), one claimed excess energy use is “propaganda” (?), and another noted that customers might not trust someone wearing such clothing. (We should add that we’re no better over here; remember the New Jersey Outrage of 2011?) But Masahiro Sato expects Super Cool Biz to lower his office’s energy consumption by around 10 percent this year, which is nothing to scoff at. Maybe they could take a look at some of these energy-saving gadgets, as well?