Microelectrode arrays implanted in the brain monitor neurological conditions in living patients all the time, sometimes even influencing brain activity... 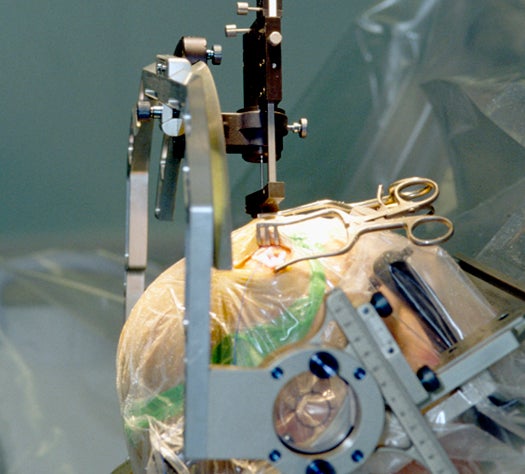 Microelectrode arrays implanted in the brain monitor neurological conditions in living patients all the time, sometimes even influencing brain activity if it gets out of line. So, thought researchers at the University of Pittsburgh, why not load one up with drugs so it can deliver chemical therapy to problem sites immediately upon detecting an issue?

The team is developing a new polymer-coated electrode that can both monitor and treat a patient immediately, a capability that could be life-changing–or even life-saving–for those living with conditions like epilepsy. Their device is basically a microelectrode like any other, but it has been covered in a conductive polypyrrole film. Chambers in the film are loaded up with different drugs and neurotransmitters like dopamine or GABA.

Under certain electrical conditions, the polymer warps in certain ways, and when it does so its pharmaceutical payloads are released. By matching up certain tell-tale electrical signals associated with things like seizures to drugs that inhibit that activity, a microelectrode array can detect something like a seizure at its onset and begin delivering treatment straight to the brain immediately.

Once the polymer coating delivers its drugs, however, it is pretty much impossible to resupply it without basically replacing it–a procedure patients really don’t want to undergo too terribly often. The team is now looking at ways add drug reservoirs, possibly in the form of carbon nanotubes.