Tevatron Did Not See A New Particle After All, Fermilab Says

America’s grand particle smasher may not go out with a bang after all. A bump in data at the Tevatron,... 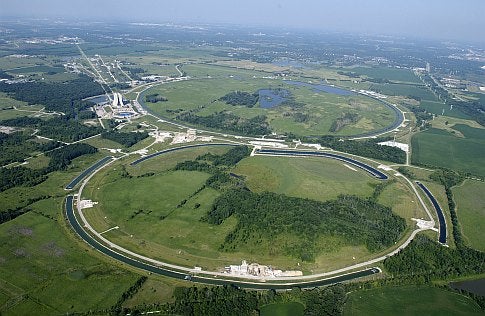 America’s grand particle smasher may not go out with a bang after all. A bump in data at the Tevatron, reported earlier this spring, turns out to be a false alarm — not a new particle or a new force of nature.

Physicists at Fermilab say they looked at 200 trillion particle collisions and did not see the same bump in data that their colleagues had announced back in April. “In terms of this effect being a real new physics discovery, I think it is close to dead,” said Stefan Sӧldner-Rembold, a professor at the University of Manchester in the UK who is a spokesman for the follow-up experiment.

As we told you earlier this spring, an analysis of 10,000 proton-antiproton collisions at the Tevatron yielded a strange result a couple hundred times. Post-collision jets of electrons and W bosons did not behave as they should, and one explanation was that a potential new particle or new force was in play. It would not have been the Higgs boson, however, because the Higgs decays into heavier particles than the new anomaly did.

But it still would have been a major finding, and a grand finale for the Tevatron before it shuts down this fall due to funding cuts.

An independent verification of the data could not find the same statistical anomaly at all, however. The initial findings came from the Tevatron’s CDF experiment; the follow-up came from the DZero experiment.

A paper describing the DZero finding was submitted to the physics arXiv and should be online by Monday, for those interested in parsing particle jets at 1.96 TeV. It was also sent to Physical Review Letters.

Now that physicists are pretty sure they don’t have a new particle to study, they have to figure out why the DZero and CDF findings were so different. Fermilab set up a task force to analyze both experiments.

“This is exactly how science works,” Sӧldner-Rembold said. “Independent verification of any new observation is the key principle of scientific research.”

Sometimes, that can mean great disappointment.