Just three years after breaking ground, China will open the crown jewel of its high-speed rail network to the public... 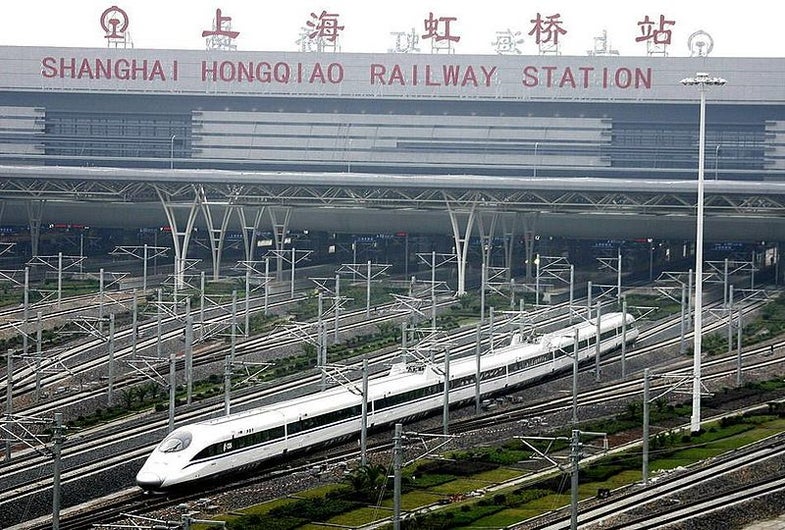 Just three years after breaking ground, China will open the crown jewel of its high-speed rail network to the public this week. The 186 mile per hour (and that’s regular operating speed) Beijing-Shanghai link takes just four hours and 48 minutes to traverse 820 miles of Chinese countryside.

Let’s break down this little infrastructure project by the numbers. It was deemed “shovel ready” just 39 months ago. In that time, Chinese engineers and workers have erected 288 bridges and punched 21 tunnels through China’s often difficult terrain. Some 80 percent of the track is laid 40 feet above the surrounding terrain on concrete pylons, circumventing the need for dangerous roadway crossings. Cost: roughly $34.2 billion.

That’s one big project. But it’s a completed project (that’s one way to manage costs–create a plan and execute it quickly) and one that should serve China well, at least if you are among the upwardly mobile Chinese that can afford train fare. Before its high speed rail boom is over, the Chinese government wants to network the whole of Asia together and eventually run trains all the way across the continent to Europe. An international link to Laos is the beginning, but a dedicated link between China’s two key eastern population hubs also marks a symbolic achievement.

Meanwhile, Americans might have a HSR link between Los Angeles and San Francisco by 2020. That is, if the Chinese help us build it.