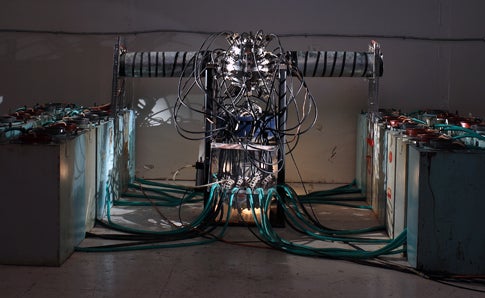 Bring up the prospect of fusion power, and often eyes glaze over. It’s not that it’s not a thrilling prospect–cheap and inexhaustible energy would solve a lot of problems here on planet Earth–but it’s been such a pipe dream for so long that it’s often hard to make people care. But at least one person with a proven track record in recognizing potential when he sees it has taken an interest in a fusion-powered future: Amazon founder and gazillionaire Jeff Bezos has thrown $19.5 million to Canada’s General Fusion to fund further research.

PopSci wrote about General Fusion back in late 2008, when the company was just getting underway in its efforts to completely upend the global energy paradigm in an office park British Colombia. At the time the company said it could provide data that would prove that fusion is indeed possible within three to four years. We haven’t seen that (publicly) yet, but whatever Bezos has seen apparently impressed him.

General Fusion is pursuing what is called Magnetized Target Fusion. In a few words, this technique essentially uses a magnetic field and plasma to break lithium down into helium and tritium, which is then separated and mixed with deuterium, which then fuses into helium (that’s a wild oversimplification, in case you were wondering).

That fusion of tritium and deuterium–both forms of hydrogen–into helium releases a huge burst of energy, which can be harvested into electricity. So where you’ve basically started with cheap and plentiful lithium, you end up with a massive amount of energy and harmless gas as a byproduct–no radioactive mess to clean up (or ceaselessly worry about).

We’re nowhere close to being able to do this. But whoever gets there first is pretty much a lock for a Nobel Prize and a massive return on investment. So maybe Jeff Bezos the venture capitalist is taking a gamble on a far-fetched idea. Or maybe he sees a short-term potential that others don’t. Whatever the impetus, this second round of funding is aimed at producing a demonstration of General Fusion’s technology rather than some kind of finished product, so don’t expect your local utility to start fusing isotopes any time soon.