The First Squid in Space: Will Its Bacteria Turn On Its Host Once Away From Earth?

We’ve already bid our fond farewell to the space shuttle Endeavour, but as it blasted into the great blue yonder... 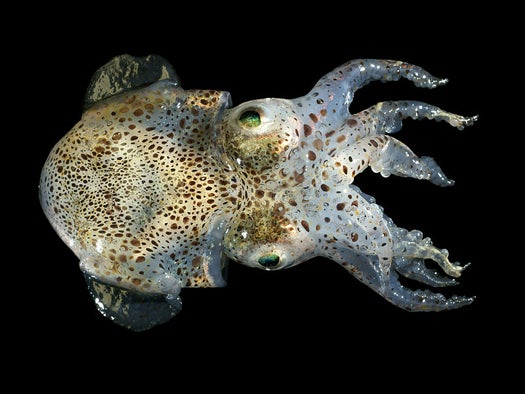 We’ve already bid our fond farewell to the space shuttle Endeavour, but as it blasted into the great blue yonder for the last time Monday, the astronauts were accompanied by a different sort of companion: the first cephalopod ever to enter space. The baby bobtail squid was only invited along because NASA wants to study the effect of space on the microbes in its organs.

The bobtail squid uses the bioluminescent Vibrio fischeri microbes to cast light downward and dispel its shadow. Bacteria that have ridden on shuttles in the past have become more vicious after their trip. But microbes such as Salmonella, which made the journey in 2007 and was subsequently three times more likely to kill a host mouse, are already harmful. NASA wants to see what will happen in the case of the squid’s mutually beneficial relationship with its microorganisms. Will they end up turning on their host?

Unfortunately, one way or the other, the squid is not going to make it back alive. Newly-hatched squid that had not yet encountered Vibrio fischeri will be colonized with the bacteria on board Endeavour 14 hours after launch. 28 hours later, it will be killed and fixed solid so researchers can examine it back here on Earth.