Just as soon as we figure it out 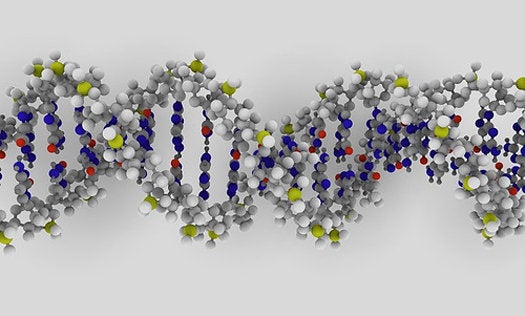 “DNA is the future of computing,” Jian-Jun Shu tells PhysOrg. And why not? Silicon is slow by comparison, computes in a binary system, creates waste heat, and is not particularly easy on the environment. DNA-based computing can perform better than silicon in several respects, Shu says, and he and a few of his students at Nanyang Technical University in Singapore have set out to prove it.

The general idea: the human body performs computations all of the time, and does so far faster than even the fastest silicon-based supercomputer. Moreover, it does so in a parallel fashion, working with more breadth, speed, and agility than the ones and zeros of silicon computation. For massive parallel problems, artificial intelligence problems, and combinatorial problems, DNA-based computing could be far more efficient.

How does it work? Shu and company are just starting to scratch the surface of what DNA computing could do, he admits, but in the lab he and his students have manipulated strands of DNA to do all kinds of things. They have fused strands together, broken them apart, snipped them, and otherwise affected them to a certain goal or end like storing information in DNA molecules that can be later retrieved for computational purposes.

The operations right now are simple: addition or subtraction mainly, nothing as complex as what silicon computers can do on their worst days. The potential for that equation to be flipped is there, but first there are several obstacles that need to be overcome. For one, there is no real interface for DNA-based computing through which humans can interact with and display data. There also exists no equivalent to the CPU–something that can facilitate these complex operations without human interference.

But that will change, Shu says, with increases in technology and more time in the lab. Just don’t expect to be computing with nucleotides anytime in the near term.