Paint it on and peel it off 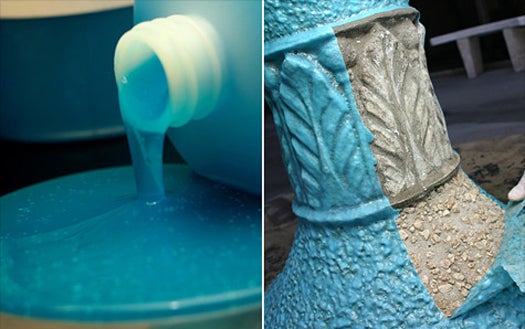 Pour it on, peel it off. Courtesy: DeconGel
SHARE

A clever technology is helping hazmat crews in Japan contain and clean up the contamination caused by the ongoing nuclear disaster there: a blue liquid that hardens into a gel that peels off of surfaces, taking microscopic particles like radiation and other contaminants with it. Known as DeconGel, Japanese authorities are using it inside and outside the exclusion zone on everything from pavement to buildings.

DeconGel was stumbled upon by accident at Hawaiian venture capital firm and technology incubator Skai Ventures. A researcher conducting an experiment got a bit of solution from an experiment on the floor; when it was cleaned up the next morning, the solution came off the floor taking everything foreign with it. Underneath, the floor was so clean they couldn’t make the rest of the surface look the same with any amount of scrubbing.

Now commercialized, the blue goo hasn’t seen much publicity. But after donating 100 five-gallon buckets of the stuff to Japanese cleanup efforts, the orders are rolling in.

When DeconGel goes onto a surface, it encapsulates absolutely everything that isn’t native to the material itself–including microscopic bits of contamination, like radiation or other pollutants. That in itself is a huge innovation. Conventionally, radiation is literally scrubbed from surfaces, essentially with soap and water. In doing so cleanup crews essentially mobilize the dangerous waste, increasing the chances that it might escape into water supplies or into the soil, while also increasing the hazard to workers themselves. The byproduct is contaminated water that is heavy and difficult to contain.

DeconGel captures contaminants first, then hardens around them, neutralizing the threats. Workers can then remove the contaminants safely, without worrying about pollutants escaping into the air or seeping into surrounding soil.

It sounds like, a pretty remarkable improvement in the way environments are remediated, and one that is likely to keep hazmat workers safer while they do their jobs. Those who do that unenviable work seem to think so. DeconGel’s maker has doubled its business every year since 2008, and with the Fukushima disaster elevating nuclear awareness around the globe, the company’s CEO told CNN Money he predicts 20 times more business over the next few years.