Our current president is a proud nerd, appearing on shows like Mythbusters, collecting comic books in his youth and dropping... 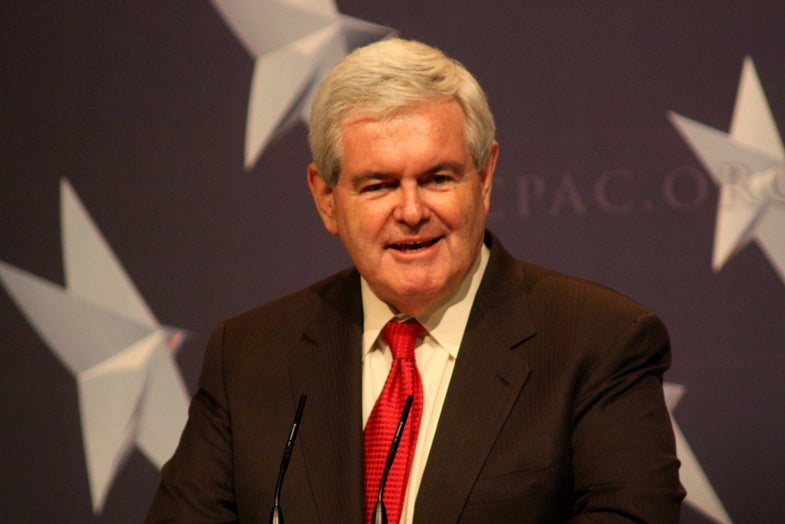 Our current president is a proud nerd, appearing on shows like Mythbusters, collecting comic books in his youth and dropping references to dilithium crystals (really). But the most prominent Republican to challenge him so far is also a science dork, judging from his Amazon book reviews.

Former Speaker of the House Newt Gingrich is fascinated with science, especially particle physics, reading several books about quantum mechanics from 2000 to 2001. His reviews are generally favorable.

“The nano world may be [one of] the most powerful new areas of understanding. ‘Nano’ is the space between one atom and about 400 atoms. At this level quantum behavior begins to replace the Newtonian (no relation) physics you and I are used to,” he wrote in a review of Brian Greene’s “The Elegant Universe.”

Later, “Quantum behavior will matter to the 21st century the way the steam engine mattered to the 18th and 19th centuries,” he wrote in a review of Richard Feynman’s “QED: The Strange Theory of Light and Matter.” He sums up the book thusly: “Feynman’s argument is that quantum behavior is truly outside the Newtonian principles of classical physics and contradicts our understanding of the world as we experience it at our large, bulky level.”

The Washington Post reports on his reviewing habit, which apparently ceased in 2008, but at one time landed him a spot as an Amazon Top 500 reviewer. Gingrich opined on 156 titles with comments that other Amazon users found to be generally helpful.

Reviewing “Genome: The Autobiography of a Species in 23 Chapters,” Gingrich says (author Matt) Ridley does a remarkable job of introducing you to how genes work, what their interactions seem to be, and the relationship between heredity and free choice.”

A book about trilobites “put the mystery, romance & discovery back into science.”

Tim Berners-Lee’s autobiography of the creation of the Internet is “a great social history of improbable invention.” Reviewing Jared Diamond’s “Guns, Germs and Steel: The Fates of Human Societies,” Gingrich announces it “will stretch your mind and insights leading to knew thoughts.”

He’s also read plenty of war history and historical fiction books, as well as mass-market spy thrillers by authors like Michael Connelly and Tom Clancy. Women wrote only six of the 156 books he reviewed, and spy novelist Francine Matthews wrote two of them, the Washington Post points out.

You can learn a lot about someone’s personality and political leanings by the books they read, and Gingrich is no exception — he read a book about the giant panda and described conservation efforts as “a private sector success,” for instance.

But not everyone puts their opinions out there, offering guidance for others on what to read. Maybe that’s just the politician in him — or maybe the closeted dork, happy to share the breadth of his own curiosity.