Fresh From Jeopardy, Artificial Intelligence Fights Infection in the ICU

It’s entertaining to watch IBM’s Watson make mincemeat of its human counterparts on Jeopardy, but the computing techniques that helped... 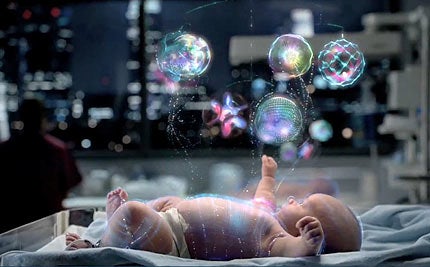 It’s entertaining to watch IBM’s Watson make mincemeat of its human counterparts on Jeopardy, but the computing techniques that helped the computer best humans at trivia could soon be saving lives in the ICU. Artemis, a software program built on the back of IBM analytics software similar to that powering Watson, is being tested as a means to provide early warnings when babies in the ICU acquire hospital-borne infections.

The ICU is naturally an environment fraught with problems, but one of the most fundamental is an information glut–patients there are surrounded by equipment churning out streams of data about each one, yet there’s no way to distill all this data to its relevant meaning in real time (usually it’s broken down into notes by a nurse once an hour).

Meanwhile, all that meaningful data on blood oxygen levels, respiratory rates, heart rates, electrocardiogram, temperature, etc. is basically ignored because there’s no way to monitor everything for patterns or trends that might hide an underlying indicator. That’s what Artemis does. Grabbing data from both medical records and those real time sensors feeding data to the machine, Artemis’ algorithms look for signals that an infection might be taking root.

This is where Artemis begins to compute like Watson. The two are different in several ways, but Artemis was built on an analytics platform called InfoSphere that came out of IBM research just as Watson did. And both make decisions on the fly based on rapidly incoming data from multiple sources, no archiving necessary.

Conventional computers can hunt for trends or patterns in data just fine, but before they can do so the data needs to be written to hard drive and databased. Artemis, like Watson, takes its inputs on go. Information flows in, the software filters out the relevant bits (be they answers to questions or symptoms) and the rest of the data flows on downstream. In a world where data is being produced prodigiously, such a computing paradigm has great potential.

And in an ICU environment, it could be lifesaving. Artemis can handle multiple streams of data from multiple infants, monitoring for the telltale signs of an infection before it gets the chance to take root (it also helps doctors refrain from diagnosing false-positives). It could someday be deployed as a centralized, remote diagnosis system, accepting online data streams from faraway locations and serving ICUs around the world.

As such, Artemis is already going global; two Chinese neonatal ICUs will connect using the technology later this year.