Video: Scientists Build a Riderless Bike That Stays Up On Its Own

Why does an unmanned bicycle stay upright (for a while) when you give it a shove? Researchers from the United... 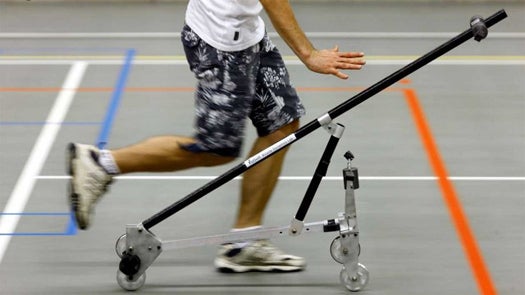 Why does an unmanned bicycle stay upright (for a while) when you give it a shove? Researchers from the United States and the Netherlands designed a riderless bicycle that shows that the various mechanisms scientists have long believed to be responsible for keeping bikes upright are actually not necessary.

On a typical bicycle, the front wheel touches ground slightly behind the steering axis (imagine a line extending down from the front forks). This construction is responsible for the “caster effect,” in which the bike centers itself not unlike a wheel on a shopping cart. The other effect that was thought to be crucial to bicycle balance is called gyroscopic precession: if a moving bike tilts one way or the other, it will just steer in that direction, thanks to the forward-spinning wheel.

Andy Ruina of Cornell University and his team built a scooter-esque bicycle whose front wheel is in front of the steering axis and whose front and back wheels connect to duplicate wheels that spin in the opposite direction. This construction cancels out both the caster effect and gyroscopic precession. But when they gave it a push, it behaved like any other bike, staying upright almost until all forward motion stopped. Here’s a video via Wired showing the bike:

This study shows that what really keeps a bike upright is odd mass distribution: lower in front and higher in the back. If a fall is imminent, the front tries to fall faster than the back. But, since they’re connected, this just causes the bicycle to steer into the fall, effectively pulling it out of danger.

This discovery could open up many new possibilities for bicycle design, as engineers would no longer have to design around the caster effect and gyroscopic precession.