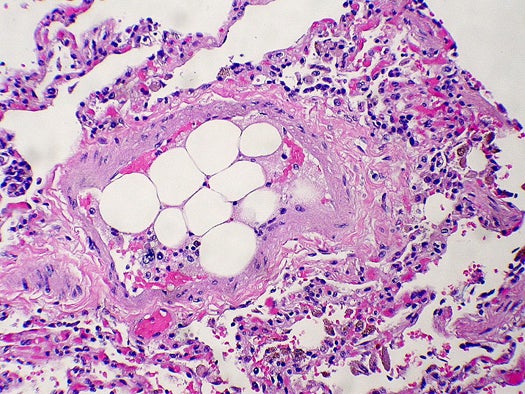 Bone marrow has long been thought to have a role in repairing damaged skin, and now UK and Japanese researchers think they’ve found the key to summoning stem cells from bone marrow to the site of damaged skin: a signal known as HMGB1. By tapping this signaling mechanism, researchers could develop new treatments for skin injuries like severe burns.

HMGB1 is like a “megaphone in the system,” researchers said, putting out a distress call when stem cells are needed. But that distress signal only goes out when initiated by certain conditions. Figuring out what those conditions are and then isolating the signal was the challenge for the researchers, based at King’s College London and Osaka University.

To do so, they injected some trackable fluorescing bone marrow cells into mice so they could track their movement. They then looked at the way the stem cells reacted to certain stimuli. In mice with mere flesh wounds, few marrow stem cells flocked to the injury site. In mice given skin grafts, many stem cells made their ways to the wound to help repair the damaged skin.

Why? Skin grafts have no blood vessels or oxygen in them, and for whatever reason this environment leads to the release of HMGB1, which appears to be the direct signal that the stem cells respond to. There’s still plenty that needs to be understood here, but the bottom line is that if a drug that mimics HMGB1 can be devised, clinicians could use it to manage natural wound healing more closely. An injection off the stuff to the site of a stubborn wound wound scramble the bodies natural mechanisms to quickly repair damaged tissues.