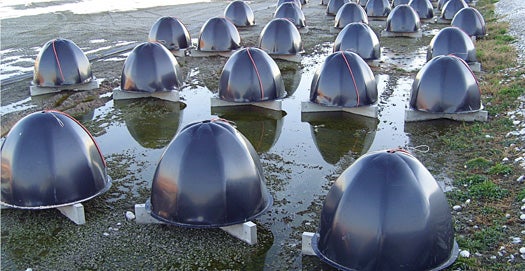 Roughly 7,000 rural communities in the U.S. deal with sewage the old-fashioned way: by dumping it into an open holding pond and letting sunlight and bacteria do the rest. Not only do these ponds smell bad, but it takes the bacteria a long time to render the sewage nonhazardous, a situation that could pose a contamination risk to waterways.

Wastewater-treatment plants, the most common solution, cost upward of $2 million to build, according to Kraig Johnson, the chief technology officer of Salt Lake City–based Wastewater Compliance Systems. Johnson, who researched biological solutions for sewage treatment at the University of Utah, is pilot-testing a simple and cheap solution: BioDomes, which house bacteria that break down contaminants in sewage and which could be installed for as little as $200,000.

So far, 200 BioDomes (colloquially known as Poo-Gloos) are cleaning up sewage in six states, including Alabama and Nevada, and early data suggests that they might be as efficient as mechanical wastewater-treatment plants.