Citing Cost, NASA Bows Out Of Two Astrophysics Projects, Including Building the Largest Scientific Instrument Ever

A gigantic laser experiment intended to study the nature of gravity and an x-ray telescope designed to look at black... 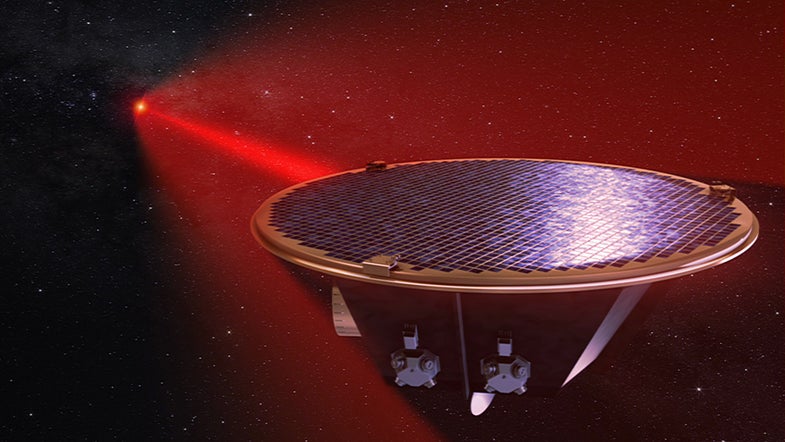 A gigantic laser experiment intended to study the nature of gravity and an x-ray telescope designed to look at black holes are being swept into the dustbin of history, too big and too expensive to survive the federal budget ax. NASA is skipping out on LISA, the Laser Interferometer Space Antenna, and the International X-Ray Observatory.

Astrophysics is a fertile field these days, but there’s just not enough funding to go around. As physicist Sean Carroll points out over at Discover, the James Webb Space Telescope is gobbling up most of it.

NASA announced the decision to abandon LISA and IXO in a conference call earlier this month.

LISA would detect ripples in space-time proposed by Einstein’s theory of general relativity. Gravitational waves flow outward from collisions of huge celestial bodies like black holes and binary systems, but there is no way to prove their existence or study them. LISA would have involved three identical spacecraft arrayed in a triangle, spaced 3.1 million miles apart. As gravitational waves reach the observatory, they warp space-time, stretching or compressing the triangle. Measuring the spacecraft’s separation would allow physicists to measure the waves. LISA would also have detected binary systems and helped scientists measure black hole collisions.

IXO would be a follow-up to the Chandra X-ray Observatory and the European Space Agency’s XMM-Newton Observatory. Both projects were listed as priorities in the Astro2010 Decadal Survey finalized last fall.

NASA’s contribution to LISA would have been $1.5 billion of the project’s $2.4 billion cost, according to Science News. NASA had committed $3.1 billion to the $5 billion price tag on IXO. JWST is running over budget to the tune of about $1.4 billion, a panel predicted last year, forcing NASA to keep tight reins over the rest of its astrophysics budget.

Meanwhile, the European Space Agency is keeping LISA and IXO on life support, and NASA may play a minor role if smaller versions of the experiments move forward. But without significant funding from other partners, this is unlikely to happen anytime soon.

So we’re left to wonder, how will NASA win the future without any funding to pay for it?