FYI: What Would Happen If I Ate Nothing But Meat?

Good ol' meat and potatoes. Without the potatoes. 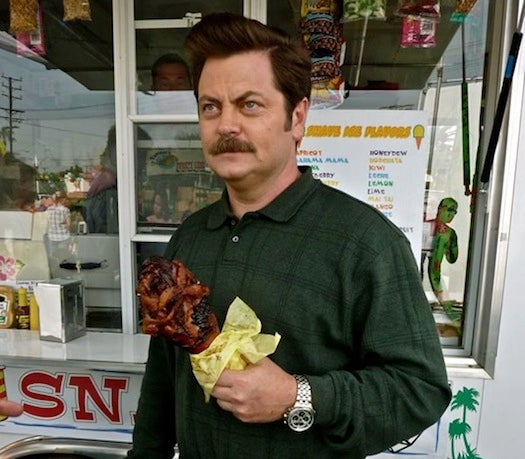 You might get scurvy, like a pirate. Cooked meat contains very little vitamin C, notes Donald Beitz, a nutritional biochemist at Iowa State University. Without the vitamin, scurvy would bring on rashes and gum disease, not to mention very bad breath. Moreover, meat lacks fiber, so you’d probably be constipated. All in all, you wouldn’t be healthy or comfortable.

That said, some groups of people have survived—even thrived—on an animal-only diet. Research suggests that traditionally the Inuit ate any number of meats, including seal, whale, caribou and fish. But they rarely, if ever, ate plant fiber. The key to their success, says Harriet Kuhnlein, the founding director of the Centre for Indigenous Peoples’ Nutrition and Environment at McGill University in Montreal, was eating every part of the animal, “and you have to eat some of it raw.” Raw meat contains vitamin C (which is lost when cooked), and the skin, hooves and bones contain fiber. For greens, Kuhnlein adds, traditional Inuit “ate the stomach contents of caribou and deer.”

Historically, they were quite healthy, she says; they almost never suffered from heart disease. Today, the meat-heavy diet lives on in the form of the controversial Atkins Nutritional Approach. Formulated by cardiologist Robert Atkins in the early 1970s, the diet prescribes that adherents dramatically cut their carbohydrate intake.

The American Heart Association issued a statement in 2001 condemning the diet for cutting necessary sources of nutrients, stating that devotees were “at risk for compromised vitamin and mineral intake, as well as potential cardiac, renal [kidney], bone and liver abnormalities.”

This article originally appeared in the June 2011 issue of Popular Science_ magazine._.