A pair of professional astronomers resolved the orbit of a bright comet using photos shot by their amateur counterparts. The... 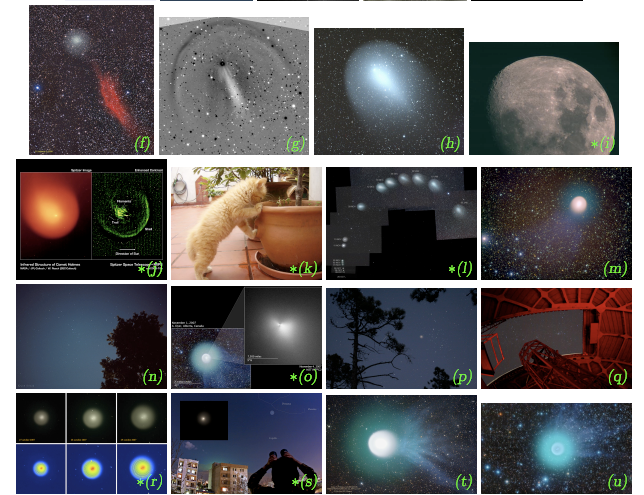 These images were calibrated by Astrometry.net, aligned in celestial coordinates.

A pair of professional astronomers resolved the orbit of a bright comet using photos shot by their amateur counterparts. The research shows it’s possible to mine Internet photo-sharing sites for science — even if the astrophotographers didn’t know they were taking part in a crowdsourcing experiment.

They fed the images into Astrometry.net, which can recognize images of the sky and measures star patterns, and found 1,299 were night-sky photos. There were some outliers, too, evidenced by the curious kitty in the montage below. But the researchers were able to superimpose many of the comet images, carefully aligning the stars, Tech Review’s arXiv blog reports.

Many of the images were time-stamped, and when they were superimposed on each other, the comet’s path across the sky was visible. Finally, Lang and Hogg compared their orbital data with observed information from the Jet Propulsion Laboratory, and found a close match.

The astronomers are already trying it again, using a collection of images of Comet Hyakatuke. They note that Flickr alone has 3,500 images of the Orion Nebula.

“You can do high-quality quantitative astrophysics with images of unknown provenance on the web,” the authors write. “Is it possible to build from these images a true sky survey? We expect the answer is ‘yes.'”