Continuous Surveillance Will Yield Clues About Life Under the Sea

"Cabled observatories" will give scientists a better picture of the unknown 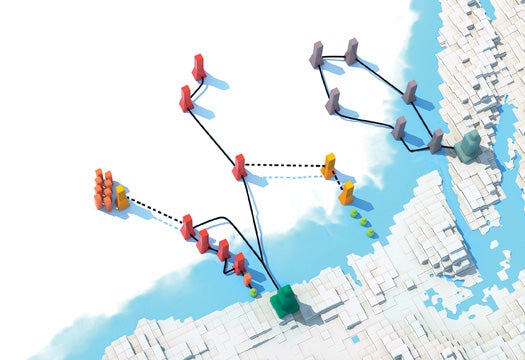 Oceanographers are building undersea sensor arrays [above] along the Pacific Northwest coastline to monitor ocean temperatures, acidity and other variables in real time. Graham Murdoch
SHARE

All we really know is that we know very little. We don’t know how temperatures are changing in the midwater zone: Satellite sensors penetrate less than seven feet below the surface. We don’t know the terrain: Our charts cover less than 10 percent of the seafloor. And we don’t know what lives there: The scientists who completed the first Census of Marine Life, an international research initiative, last year documented some 190,000 species—but know next to nothing about as many as a million more.

So it can be easy to feel lost at sea. A group of scientistsat the University of California at Berkeley, for instance, claimed that a previously unknown, petroleum-munching microbe accounted for the surprise disappearance of a 22-mile-long oil plume after the Deepwater Horizon disaster in the Gulf of Mexico last year. But others argued that the plume hadn’t disappeared at all, or that we simply didn’t know enough to know if it had. “The true unknown is the interdependencies, the absolutely complex linkages,” says Larry Mayer, the chairman of a National Academy of Sciences committee studying the gulf’s ecosystems after the spill. “When you start asking questions about the impact of midwater oil on deepwater biota, or how that cascades into the atmosphere, or how that affects clams and mussels—things like that, nobody really knows.”

“The scale of the oceans is the problemThe true unknown is the interdependencies, the complex linkages.,” says Giora Proskurowski, an oceanographer at the University of Washington. Saltwater covers 71 percent of the planet, 139 million square miles. “But it’s not just surface area; it’s also depth. And it’s that they’re dynamic in time.” Research vessels motor for five or 10 days at $25,000 a day just to reach the middle of an ocean. In deep water, generating a full salinity and temperature profile can mean parking in the same spot for more than four hours, unspooling and then retracting 10,000 feet of wire.

Shipboard sampling is necessarily piecemeal—single points in space, single points in time. Now, though, scientists are pushing for a radically more comprehensive approach: continuous data collection. Proskurowski, Mayer and hundreds of others are working on the National Science Foundation’s $760-million Ocean Observatories Initiative (OOI), which will wire the Pacific and Atlantic with a network of data and power cables. The network will send 200 kilowatts out to sea to power remotely operated vehicles and 49 types of sensors and then stream data back through fiber-optic lines. China, Korea and several European countries are pursuing similar “cabled observatories,” the possible beginnings of a network of networks.

Meanwhile, Ronald O’Dor, a chief scientist for the Census of Marine Life, is spearheading the $170-million Ocean Tracking Network, an international consortium fitting salmon, sharks, seals and other marine animals with acoustic tags and laying down listening lines of receivers in every hemisphere—a kind of “telephone system” for the oceans, O’Dor says.

Which brings us to another way we can save the seas: money. NASA’s exploration budget is 900 times that of the National Oceanic and Atmospheric Administration’s. The OOI’s construction budget, $387 million, is 1/17 of that for the James Webb Space Telescope, the $6.5-billion replacement for the Hubble. And as O’Dor tries to raise funds and recruit scientists for OTN’s oceanic telephone system, he’s confined to using landlines in his Washington, D.C., office. “I run this global project,” he says, “but so far there’s no travel budget.”

Check out more ways to save our seas