The most complete vertebrate symbiosis ever discovered 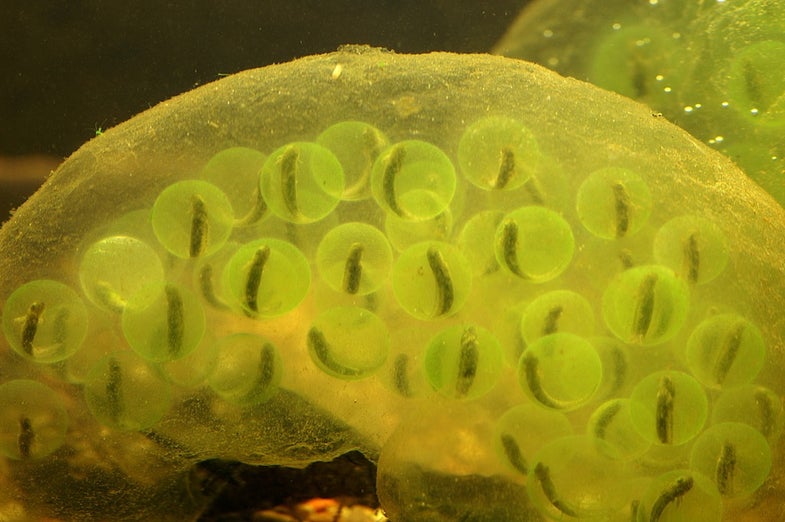 Algae live inside the cells of salamanders, in the most intimate symbiotic relationship ever seen involving a vertebrate species. The algae live in developing salamander embyros and might help them grow, researchers say.

The spotted salamander lays its eggs in ponds, where a species of green algae called Oophila amblystomatis, an “egg-loving” unicellular alga, infiltrates the egg capsules.

Endosymbiosis, as this cell-within-a-cell system is called, has been seen in other creatures like coral but is extremely rare in vertebrates, partially because vertebrate immune systems are adept at warding off invaders.

Scientists have known about the relationship between algae and salamanders for at least 100 years, and they learned in the 1980s that neither species does performs well in the absence of the other, according to Indiana University, home of co-author Roger Hangarter, an IU biologist. In previous experiments, salamander embryos did not develop as fully without the green algae, and the algae grew more strongly when they were exposed to water where the embryos had been respiring.

For a long time, scientists thought the algae lived next to the salamander embryos, consuming their nitrogen-rich waste. The embryos would benefit from the highly oxygenated water. But the research team, led by scientists in Nova Scotia, says algae are living within the embryos. The researchers believe the algae might be providing oxygen and carbohydrates directly to the salamander cells they’re living in, according to a report in Nature News when this research was first announced at a science conference last year.

The results have now been further explained and published in this week’s edition of the Proceedings of the National Academy of Sciences. The algae permeates the embryo as it develops, lending the salamanders a green hue. Lead author Ryan Kerney of Dalhousie University in Halifax, Nova Scotia, used electron microscopy to spot the invaders.

The researchers are not sure how this infiltration happens, but Hangarter made a time-lapse video showing a green flash as the embryo’s nervous system develops. This corresponds to an algal bloom, feeding off a discharge of nitrogen, and scientists believe the algae might enter through the exit.

Biologists believe endosymbiosis preceded the formation of cells as we know them, with their small parts that perform unique functions. Understanding how it works could help explain cellular evolution.

Meanwhile, the cell-within-a-cell finding leads to plenty of new questions about endosymbiotic relationships in other vertebrates and amphibians.

“It raises the possibility that more animal/algae symbioses exist that we are not aware of,” Hangarter said.