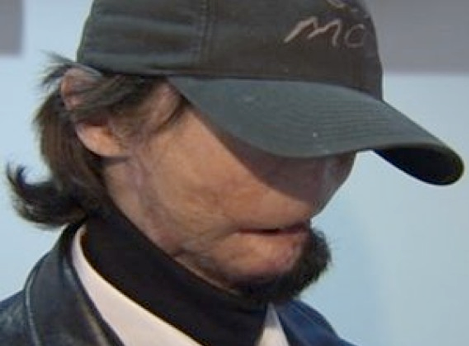 Dallas Wiens, the first American full-face transplant recipient, in a photo taken before the surgery. He now has a new nose, lips, skin and muscles and nerves. DallasWiens.com
SHARE

A 25-year-old father from Fort Worth, Texas, received a new face in a 15-hour procedure last week, Brigham and Women’s Hospital announced Monday. Dallas Wiens is the first American to receive a full facial transplant.

Wiens received a nose, lips, facial skin, muscles and nerves from a donor, who was not named. The procedure involved more than 30 doctors, nurses and anesthesiologists, the hospital said. It was the country’s first complete facial transplant; two other procedures were considered “partial” transplants.

Wiens was using a cherry-picker lift in November 2008 to paint a church when he hit a power line. The live electrical wire essentially burned off his face, leaving him blind and without a nose or lips. He was in a coma for three months, and although doctors were able to graft skin from his back and thighs onto his head, they could not reconstruct his face.

In a YouTube video last year, he spoke about why he wanted to receive a face transplant, and how he wanted to smile again and feel kisses from his 3-year-old daughter, Scarlette.

Last week’s procedure was almost exactly a year to the date of the world’s first-ever full facial transplant, which restored facial features to a Spanish man who accidentally shot himself in the face. In 2009, Brigham and Women’s Hospital surgeons performed a partial transplant on James Maki, who was disfigured in a subway accident. In 2008, the Cleveland Clinic transplanted 80 percent of the face of Connie Culp, who was shot in the face in 2004.

Wiens was working as an independent contractor at the time and didn’t have health insurance. Medicaid covered about two dozen surgeries before dropping him from their rolls. The Defense Department underwrote his surgery, hoping to advance face transplant techniques that could help injured warfighters.