Using a combination of microscopy methods, Harvard researchers have untangled part of the circuitry of the cerebral cortex, illuminating brain... 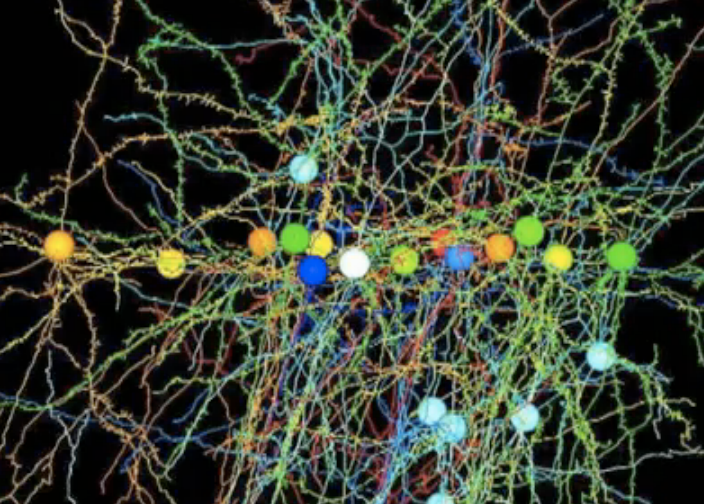 Researchers painstakingly reconstructed the connections among just 10 neurons in a small slice of a mouse brain, helping untangle the complex networks that explain how the brain sees. Harvard University
SHARE

Using a combination of microscopy methods, Harvard researchers have untangled part of the circuitry of the cerebral cortex, illuminating brain connections in 3-D. A new neural circuit model will allow researchers to crawl through the individual connections in a neural network.

Scientists have come a long way in imaging the connections among neurons in flies and mice, and can watch the brain process various types of information by watching neuron activity. But monitoring this activity shows scientists what the neural circuits are doing, not how they’re doing it. Understanding the ways in which neurons connect and communicate would shed more light on how the brain works, especially the cerebral cortex, the seat of consciousness and memory.

Researchers started with a pinpoint-sized section of a mouse brain that is involved in processing vision, as Harvard explains. Led by Clay Reid, professor of neurobiology at Harvard Medical School, the team used a laser-scanning microscope to record fluorescence as specific neurons fired, and an electron microscope to study the same neurons at nanometer resolution. They took more than 3 million high-resolution images, and sent them to the Pittsburgh Supercomputing Center at Carnegie Mellon University so they could be stitched into 3-D pictures. Finally, the researchers painstakingly examined just 10 neurons, following their paths through the brain’s dense circuitry to compose a 3-D diagram of the brain’s wiring.

It is a very promising development, the researchers say — the questions scientists can now address are too numerous even list, Reid said. He believes within a decade, researchers will be mapping the activity of thousands of neurons in a living brain.

“In a visual circuit, we’ll interpret the data to reconstruct what an animal actually sees. By that time, with the anatomical imaging, we’ll also know how it’s all wired together,” he said.

Watch Reid explain his work in the video below. It’s reported in today’s edition of Nature.