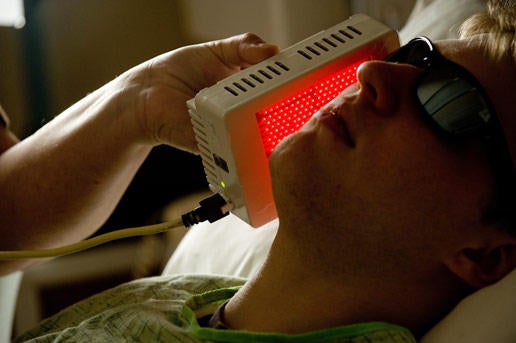 A powerful NASA-developed grow lamp designed for the space shuttle can ease a debilitating side effect of cancer treatment, according to a new study. That’s directly from the lamp itself, not because it is used to grow medicinal plants. The treatment is under review by the Food and Drug Administration.

The technology is called High Emissivity Aluminiferous Luminescent Substrate, or “HEALS,” and in a clinical trial, it used the equivalent energy of a dozen suns to alleviate a condition called oral mucositis, essentially mouth and throat sores. Patients who take chemo drugs have a high incidence of mucositis, which can be so painful that they can’t eat solid foods.

HEALS was initially developed as a plant growth chamber for shuttle missions. It uses LEDs that emit long wavelengths of light, stimulating cells to grow (or to aid in healing). The LEDs emit plenty of photons, but no heat, according to NASA.

The study used a WARP 75 light-delivery system, which provides the equivalent light energy of 12 suns from each of 288 LED chips, each the size of a grain of salt. There’s no heat, just lots of energy.

In a two-year, double-blind trial, researchers tested the light therapy on 20 cancer patients at Children’s Hospital of Wisconsin, and 60 patients from the University of Alabama at Birmingham. The patients all had bone marrow transplants or stem cell transplants. They were organized into groups at low and high risk of developing mucositis. At random, half of each risk group received HEALS treatment and half were treated with a placebo device that had no therapeutic effects.

Nurses held the devices close to patients’ left and right cheek and neck for 88 seconds each, every day for two weeks at the start of the bone marrow or stem cell transplant. Patients filled out a form to describe their levels of pain, and doctors and nurses checked their mouths for signs of mucositis.

Ultimately, they found the patients with real HEALS treatment experienced less pain, NASA said. There’s a 96 percent chance this was a direct result of the light therapy, according to the study.

Doctors say the treatment could offer several benefits, including better nutrition, less drug use and improved morale, which can all help patients improve faster.