Future Firefighters Could Fight Fire With Blasts of Flame-Bending Electricity

In some respects, firefighting technology has come a long way over the past several decades–we now have flame suppressing foams... 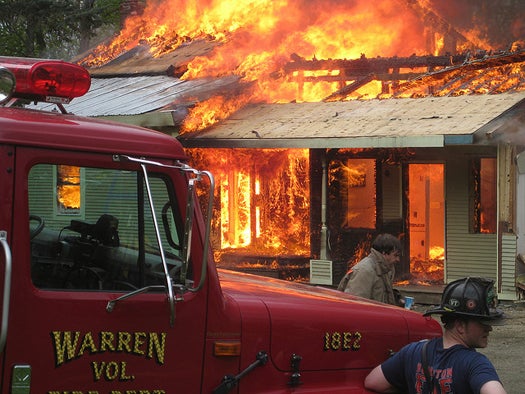 In some respects, firefighting technology has come a long way over the past several decades–we now have flame suppressing foams and powders for instance, as well as new ways of delivering them to the fire. But fundamentally, we’re still fighting fires the old fashioned way: point hose/bucket/ pressurized container and drench. But a team of Harvard researchers envisions a day when firefighters will snuff out flames not with a physical suppressant but with a blast of electric current.

Today at the 241st National Meeting & Exposition of the American Chemical Society, scientists described a means of suppressing or extinguishing flames without flooding buildings or tapping a vast source of water. Noting a 200-year-old observation that electrical charges can affect the shape of flames, they seized on the phenomenon and developed an electrical wave “blaster” that could be the basis of a new genre of firefighting tech.

The researchers’ setup involves connecting a 600-watt amplifier to a kind of wand that directs the electrical current into a beam. The researchers then created an open flame about a foot high. From a distance, the wand was able to snuff out the flame entirely over and over again.

The process by which it does this is complex, the researchers say, and is actually not really well understood (there are a lot of different things happening at once, apparently). But critically, it seems the carbon particles (soot) generated during combustion are easily charged, and once charged they respond to electric fields in strange ways that affect the stability of the flame. Shake that stability hard enough, and the flame collapses.

Six-hundred watts is roughly what it takes to power a high-end car stereo, but the researchers think they could achieve similar effects with one-tenth the wattage. That means such a wave blaster could be pared down into a handheld unit or one carried on the back.

Such a blaster could allow firefighters to open a path in a wall of flame in order to get inside (or out of) a burning building, or open a passage of escape for people trapped inside. The tech could even be built into ceiling mounted fixtures like the sprinklers that are ubiquitous in buildings today, saving entire buildings from getting drenched when a fire breaks out in one small corner.