Rinderpest, the Cattle-Killing Plague, to Become the Second Officially-Eradicated Scourge

The UN will formally announce the triumph this summer 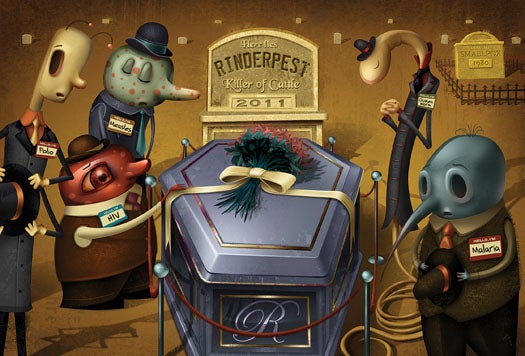 The plague begins with a fever, weepy eyes and a drippy muzzle. Dysentery and diarrhea follow, and then death by dehydration. Rinderpest sweeps through a herd quickly, and can kill half its animals in a matter of weeks. The loss of thousands or even tens of thousands of cattle can devastate a community. An outbreak in 1889 killed enough of Ethiopia’s livestock that the ensuing famine caused a third of the country to starve to death.

But this summer, the Food and Agriculture Organization of the United Nations plans to formally announce rinderpest’s eradication, making it the second scourge, after smallpox, to be intentionally wiped off the face of the Earth.

Rinderpest arrived alongside the domestication of cattle, in the Indus River valley about 10,000 years ago. It traveled west out of Asia with the Huns and Mongols. With the growth of the railroad, rinderpest spread so quickly that Europe was nearly cow-free in the 1870s.

Epidemics continued among Africa’s cattle and wildlife—including buffalo, antelopes and giraffes—well into the 20th century. Then, in 1950, an English veterinary pathologist named Walter Plowright started working in labs in Kenya and Nigeria. Soon he was growing rinderpest, and by the 1960s he had a weakened strain that gave lifelong immunity without side effects. Plowright had made a safe, inexpensive vaccine, and about 100 million doses were delivered throughout Africa from 1962 to 1969. But still the disease returned.

In the 1980s, Nigeria’s new oil wealth created a demand for beef that brought cattle carrying rinderpest from as far as Somalia, and a pandemic soon swept across the continent. Another vaccination campaign followed. The African Union and the United Nations trained health workers and respected villagers, who inoculated livestock, tested animals, and watched for signs of infection—a rigorous education program absent from previous eradication efforts.

By sequencing the virus’s genetic material, scientists discovered that there were several strains, which helped them track the disease to remote areas of East Africa (smallpox’s last refuge, too) and focus their vaccination and surveillance.

The Food and Agricultural Organization says that rinderpest was last spotted in the wild in Kenya in October 2001. Following a decade of testing, the FAO believes that no infected animals remain on Earth. After a seven-decade fight, rinderpest lives on in laboratory freezers—and nowhere else.