A new type of endoscope with a super-small camera on its end could yield cheap, disposable scopes for peering inside... 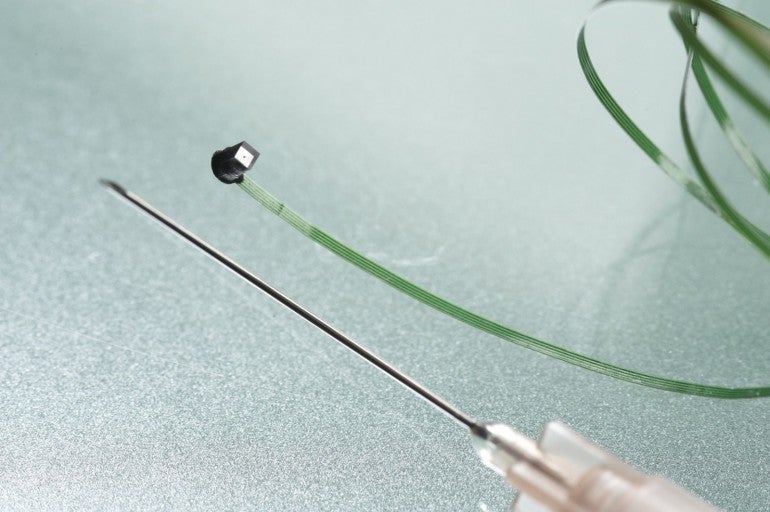 A new type of endoscope with a super-small camera on its end could yield cheap, disposable scopes for peering inside your body. The camera is about the size of a grain of kosher salt, and its designers say it’s the smallest camera ever.

Endoscopy involves inserting a cable with a camera lens on it through your body’s natural openings or through small incisions, so doctors can check out internal organs, examine injuries or perform surgery. But endoscopes are complex to produce, requiring complex silicon wafer etching, which means they’re expensive. They also must be carefully sanitized with each use, which is time-consuming.

The new model, designed at the Fraunhofer Institute for Reliability and Microintegration in Berlin, is so cheap that it could be tossed out with the doctor’s latex gloves.

It’s possible with a new fabrication method that simplifies the wiring of the image sensors, according to a Fraunhofer news release. Typical endoscopic cameras consist of a lens at one end and a sensor at the other, but this one is self-contained, as Gizmag further explains. The camera has a resolution of 62,500 pixels and transmits images through an electrical cable.

It’s just one cubic millimeter in size, which the researchers say is the smallest camera known.

Along with medical applications, endoscopes are used in bomb disposal and in the construction industry. The automotive industry is apparently interested in this new one, according to Fraunhofer — the tiny cameras could be used to replace outside rear-view mirrors, improving cars’ aerodynamics, or they could be installed to monitor drivers’ eye movements to make sure they’re paying attention to the road.

The German image sensor firm Awaiba GmbH developed the tiny endoscope with Fraunhofer Labs, and its owner hopes to commercialize the technology by next year.