This Is Your Massive Snowstorm, America

This January may have been the snowiest month on record here in New York, but it looks like the winter... 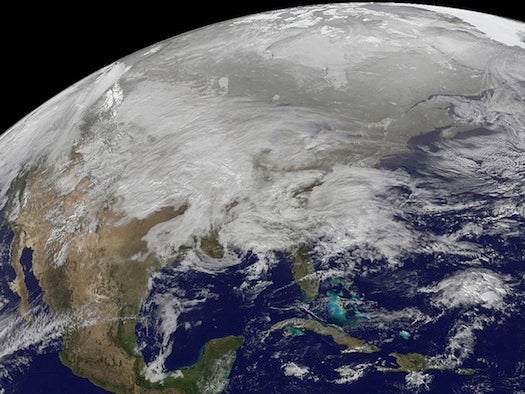 This January may have been the snowiest month on record here in New York, but it looks like the winter isn’t anywhere near ready to stop vomiting snow all over the country. NASA posted this image of the positively massive storm that’s about to hit the Midwest (and then the rest of the country), and it looks like we’ll be needing every one of those high-tech snow-removal strategies.

The image, taken by NASA’s GOES-13 satellite, shows the low-pressure system hitting the Midwest today, with heavy snow in Iowa, Minnesota, and Wisconsin, but also pounding the Big Sky region, from Montana all the way down to Arizona. That’s all moving east as well, into the Tennessee valley and soon up the coast to the Northeast. All in all, about a third of the continental U.S. is going to get absolutely pounded, so it’s as good a time as any to start investing in snow-pooping robots.