Ever want to cancel out a laser beam? Now you can 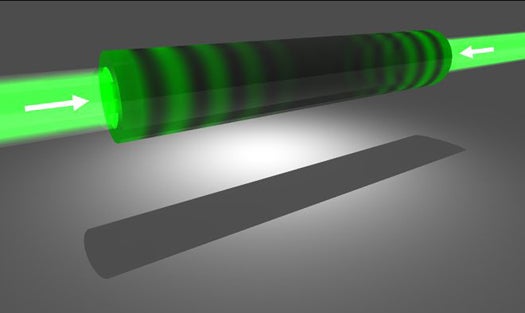 There are aspects of science that lend the subject its reputation, at least among schoolchildren, for being “boring” (Punnett squares come to mind). Then there are things like lasers that are completely awesome, regardless of whether you’re eight years old or 80. Which is why it’s mind-blowing that in what must be the least fun science lab in all the universe, researchers have developed an anti-laser. That’s right, Yale scientists are undoing perfectly good laser beams.

But the development of a device that can absorb an incoming laser beam entirely does have some decidedly interesting implications, not least in optical computing systems.

The researchers were looking into theories to explain which materials might be used to create lasers, and their theory predicted that it should also be possible to create a medium capable of absorbing incoming light. The device they ended up with turns to lasers tuned to a specific frequency into a silicon optical cavity. The cavity traps the light, forcing it to bounce around until all of its energy is dissipated as heat.

Their demo device can absorb 99.4 percent of incoming light at a specific wavelength, a property that could be used as an optical switch in future computing schemes that use light rather than electrons to carry out operations. Such a computer could potentially turn certain wavelengths of light off without affecting others, allowing for high degree of control within a computing system. It also might be useful in medical applications, like imaging through opaque biological tissues.