With the World’s Largest Antimatter Trap, UCSD Scientists Aim to Trap a Trillion Positrons at Once

Antimatter is a very fickle medium; infinitely interesting to study, it tends to disappear in a burst of gamma rays... 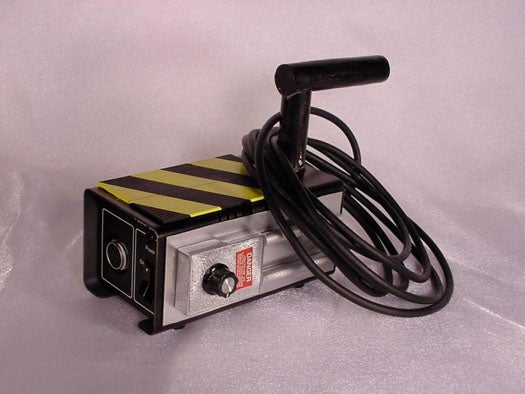 This is not what an antimatter container looks like. But scientists do want to engineer a portable version of their positron trapping tech. JD Hancock
SHARE

Antimatter is a very fickle medium; infinitely interesting to study, it tends to disappear in a burst of gamma rays when it comes into contact with absolutely anything (anything that’s considered ordinary matter, anyhow). That property makes it difficult to get a good look at antimatter, so a team of researchers at the UC San Diego is building the world’s largest antimatter container.

Antimatter is basically the finicky opposite of regular matter (it occurs briefly on Earth within lightning storms) and for the aforementioned reasons, researchers can’t just bottle antimatter in any old container. Physics Professor Clifford Surko’s team plans to corral antimatter using new methods that create specialized states of antimatter in large clouds–more than a trillion particles at one time–and contain them in “multicell traps” capable of compressing them and focusing them into small beams.

The specific antimatter particles Surko’s team aims to contain are “positrons,” the antimatter opposite to the electron. Using finely tuned magnetic and electric fields, his research team aims to gather and slow positrons from radioactive sources, storing them for days rather than the usual billionth of a second that they last when introduced to ordinary matter. From there, the team has developed methods for cooling the positrons to temperatures as low as that of liquid helium, compressing them and forming them in to thin streams that can be employed in a variety of ways.

What can you use a thin stream of positrons for? Mostly for studying positrons, but that’s actually pretty exciting. Such a positron trap would enable scientists to study things like electron-positron plasmas believed to exist within neutron stars and antihydrogen, the antimatter opposite of hydrogen.

There are more practical applications as well. PET (Positron Emission Tomography) scans are used regularly in laboratory settings to study metabolic processes and in drug discovery, and while it doesn’t rely on these new methods Surko’s team could find ways to improve current medical techniques. The team also hopes to eventually develop portable antimatter traps, making it possible to pack anti-stuff anywhere.