By Tuning a Laser to Pull Rather Than Push, Researchers Design a Working Tractor Beam

There’s no escaping it: though the tractor beam is a staple of sci-fi space-faring scenarios, it’s also extremely counter-intuitive. How... 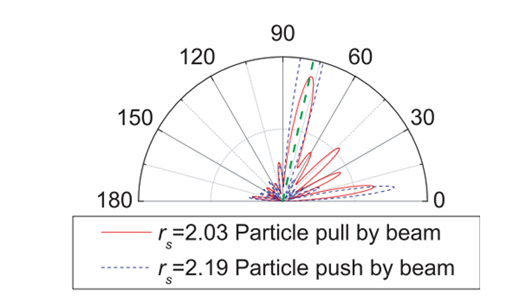 There’s no escaping it: though the tractor beam is a staple of sci-fi space-faring scenarios, it’s also extremely counter-intuitive. How does one pull something in via an outward propagating beam? Now a few Chinese researchers think they’ve found the answer via a theoretical method that should generate a backward pulling force from a forward traveling stream of photons.

The Fudan University team won’t be capturing rebel tranports with their beam any time soon–it only works (theoretically) at the nano-level–but it does achieve an interesting turnabout of physical force. We know photons exert an outward momentum; this is what allows solar sails to harness sunlight to generate small amounts of thrust. But carefully tuned to meet two conditions, a system can be created to turn “push” into “pull.”

The conditions: For one, the momentum of the outward propagation must be very small. Second, several multipoles within the target particle must be excited at the same time, scattering the beam. If the angle of this beam scattering is just right, the total forward momentum can be negative–that is, it can have negative thrust which equates to reverse thrust, or pull–meaning the target is pulled back down the stream of photons toward the source.

It won’t reel in a crippled satellite or an enemy battle cruiser, but it could be used at the nanoscale to manipulate particles in interesting ways that could be especially useful in optical systems. That is, if it works in practice as well as it does in theory. Check out the full paper here.