In a process much like the materials science equivalent of bioengineering, researchers at the Department of Energy’s Ames Lab have... 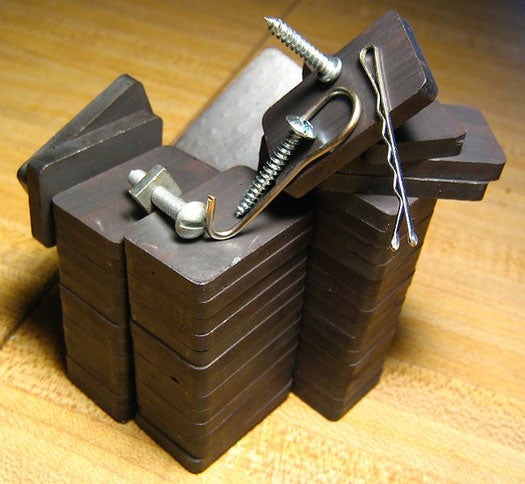 In a process much like the materials science equivalent of bioengineering, researchers at the Department of Energy’s Ames Lab have figured out how to replace individual atoms in a solid magnetic compund much as biologists tweak and replace individual genes to alter organisms. The result are magnets with markedly different properties, all from swapping in a few atoms here and there.

While a few atoms doesn’t sound like much in the grand scheme of things, swapping them precisely into and out of materials is a massive chore. Metallic solids are generally highly symmetrical, with their atoms organizing themselves into a tight and highly ordered crystal lattice. The individual atoms making up any lattice influence its properties, but the researchers found that atoms at certain locations in the lattice have a disproportionate influence over such characteristics as melting point, strength, and even magnetism.

As such, the researchers hypothesized that by swapping atoms in these key locations in the lattice might allow them to drastically change its material properties. They chose to work with gadolinium-germanium, a highly symmetrical alloy in which they determined that certain sites occupied by gadolinium atoms were much more active than other sites when it came to bringing ferromagnetic order to the whole lattice.

Using a method called density functional theory, they were able to determine precisely which atoms in the alloy were good targets for experimentation. By swapping just a few gadolinium atoms in an alloy with lutetium they were able to more or less demagnetize the alloy. Substituting an equal number of lanthanum atoms into those spaces showed no significant effect, though they speculate that substituting even more lanthanum into more places would begin to impact the alloy’s magnetism as well.

Unfortunately the researchers figured out how to weaken, rather than strengthen, an existing alloy by playing with its atomic structure. But they may have peeked behind the curtain of an important branch of materials science. As supplies of rare earth elements grow rarer, researchers are struggling to find new solutions to increase magnetism in various materials to make up for potentially dwindling supplies of rare earth magnets. If we can atomically engineer magnetic solids to shed their magnetism, we might be able to engineer new atomically engineered alloys with greater magnetism, greater strength, or other favorable properties without relying on rare or environmentally harmful materials and processes.