Inside this salt crystal, which weighs just two tenths of a gram, is an ancient ecosystem: 30,000-year-old bacteria and the... 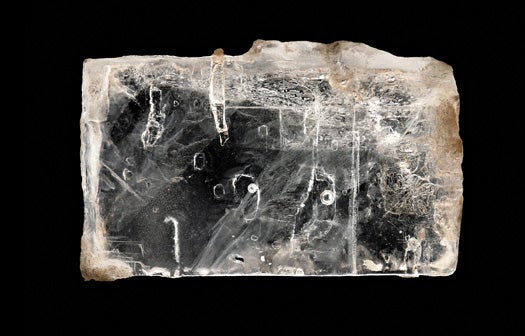 Inside this salt crystal, which weighs just two tenths of a gram, is an ancient ecosystem: 30,000-year-old bacteria and the genetic material of long-dead algae and fungi. Such evidence is crucial to understanding how organisms evolve, explains J. Koji Lum of Binghamton University. Last summer, a team of researchers led by Lum and his colleague Tim Lowenstein extracted the still-living bacteria along with the DNA from ancient fungi and single-celled algae.

The entire ecosystem was trapped within water droplets in the salt crystal, in what’s known as a fluid inclusion. Although they had been dead for millennia, the algae were still filled with glycerol, providing the bacteria with food. And because the salt was found deep underground, the microorganisms were protected from ultraviolet rays that can mutate DNA, giving scientists a good glimpse into life’s past.