Yeah, you’ve been thinking about getting that thing checked out, but it’s just a mole right? Such is the problem... 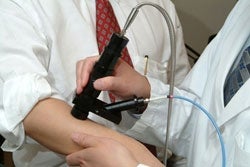 The Verisante Aura uses Raman spectroscopy to analyze moles and other skin growths for the presence of malignant cells nearly instantaneously, taking some of the guesswork out of melanoma diagnosis. Verisante Technology
SHARE

Yeah, you’ve been thinking about getting that thing checked out, but it’s just a mole right? Such is the problem with melanoma; it’s tough to know which spots on the skin are benign and which could be the hallmark of early-stage skin cancer. Most dermatologists still decide which moles require a biopsy by good old fashioned eye-balling, but a new device developed by researchers at British Colombia Cancer Agency (BCCA) could remove that guesswork, using a handheld laser to quickly identify problem spots that require closer examination.

Called the Verisante Aura, the device employs Raman spectroscopy to identify the molecular makeup of moles by changing the vibrational state of the molecular bonds in a skin growth. Shining a particular laser light on those bonds causes a shift in the kind of light that is reflected back to a sensor, and that shift belies exactly what kinds of molecules are there and in what concentration they exist.

The device then checks the spectral signature against a database containing examples of melanoma and other skin diseases. By simply shining some laser light on the skin, a doctor can get a near-instantaneous red or green light regarding whether a growth requires further diagnosis via biopsy.

It’s not a magic wand for diagnosis, and regulatory agencies could take issue with the fact that clinicians might rely too heavily on such a technology, which could produce false negatives or otherwise discourage doctors from requesting a biopsy when one might be advisable. But it could also greatly inform the process by which dermatologists identify potential problem areas and reduce the number of needless biopsies which—aside form causing a certain degree of physical pain—tie up laboratories and pile onto overall health care costs.