Last month’s solar storm was pretty stellar, but the massive flare that erupted from the sun yesterday put it to... 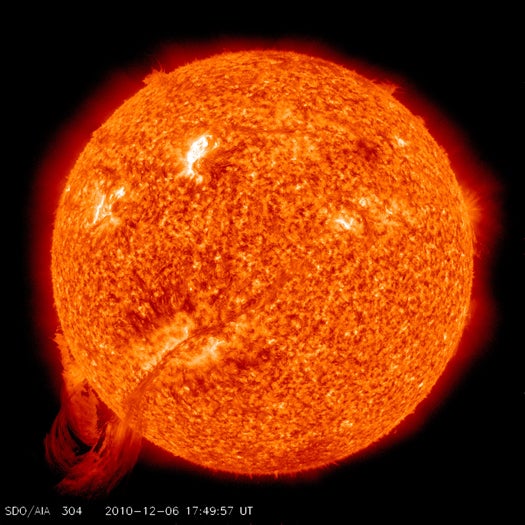 Last month’s solar storm was pretty stellar, but the massive flare that erupted from the sun yesterday put it to shame, lashing out from the solar surface in a beautiful filament that stretched for 435,000 miles – nearly twice the distance between the Earth and moon and about 60,000 miles larger than last month’s plasma ejection.

The storm is not directed Earthward, so there’s no threat from yesterday’s solar activity either to earthbound electronics or to satellites in orbit – a good thing, since NASA’s ‘Solar Shield’ isn’t in working order just yet. In the meantime, the filament-like flare has been putting on a show above the solar surface since early Monday morning, posing for backyard astronomers and astrophotographers who should have no problem seeing the structure from amateur telescopes. But be advised; spaceweather.com reports the structure is now showing signs of instability.

That could be good for solar watching, as massive filaments like this one often go out with a bang, collapsing back into the sun explosively. But do yourself a favor and listen to what your mother told you; don’t look directly into the sun. If you’re trying to catch a glimpse of the storm before it collapses, make sure you get the proper telescope filter from an established optics vendor before you turn your lens skyward.

Barring that, you can catch a pre-filtered preview of the flare below.