Roboticists have put a lot of time and effort into creating machines that function like living things, but what about... 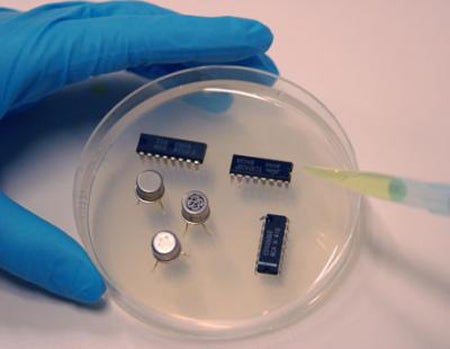 Roboticists have put a lot of time and effort into creating machines that function like living things, but what about living things that function like computers? Synthetic biologists at the University of Gothenburg in Sweden have taken a rather large step in that direction by creating genetically modified cells that communicate with each other as though they were electronic circuits.

Using yeast cells, the team there devised synthetic circuits via a gene-regulated communication method employed naturally by the cells. The cells are programmed genetically to collect information about their environment based on a set of criteria established by the researchers. The yeast cells then communicate that information to each other by secreting molecules.

The researchers accomplished this with a single type of yeast cells with a single type of modification, but by diversifying the kinds of genetic modifications the researchers could produce different yeasts with different roles, allowing for more complex “circuits” to be constructed. That, in turn, could lead to some very cool applications; biological cells could be programmed to monitor our bodies for signs of particular toxins or illnesses, and artificial networks could be created that could perform tasks at very tiny scales in industry, medicine, and science.