Findings could lead to better batteries

By building the tiniest functional lithium-ion battery ever, researchers at Sandia National Laboratory have explained why these power sources are so short-lived: their parts engage in an atomic-scale contortion act that leaves them weakened and susceptible to damage.

So next time you throw out (and hopefully recycle) a pair of lithium batteries, show some respect for the deformations it suffered while powering your camera.

The itty-bitty battery provided an unprecedented view of the charging process, as scientists watched it writhe and swell as ions flow in. The work, published today in the journal Science, illuminates how rechargeable batteries die and could lead to better, longer-lasting alternatives.

You can only recharge and reuse lithium batteries for so long before they lose capacity and fail, because the continual charging cycle damages the electrodes. The new nanometer-scale images show just how this happens — it turns out the electrodes fatten and stretch as lithium ions flow inside, like a snake stretching to fit its swallowed prey. The ions also change the electrode’s physical characteristics.

Over time, all these contortions damage the electrode material by introducing tiny defects, according to researchers at the Department of Energy.

Lithium batteries are ubiquitous in everything from cell phones to hybrid cars, but they are limited by low energy and power densities. Hoping to improve these qualities, researchers wanted to find out exactly how they work. Scientists at Sandia National Laboratory formed a tiny battery under a transmission electron microscope. It consisted of a single 100 nm diameter tin oxide nanowire anode, a bulk lithium cobalt oxide cathode, and an ionic liquid electrolyte. In one of the videos, the lithium ions look like juice being sucked through a nanowire straw.

Battery researchers do use nanomaterials as anodes, but they use them in bulk rather than individually, according to Sandia Labs researcher Jianyu Huang. It’s like “looking at a forest and trying to understand the behavior of an individual tree,” he said in a statement. By contrast, his method allowed atomic-scale observations of individual trees. 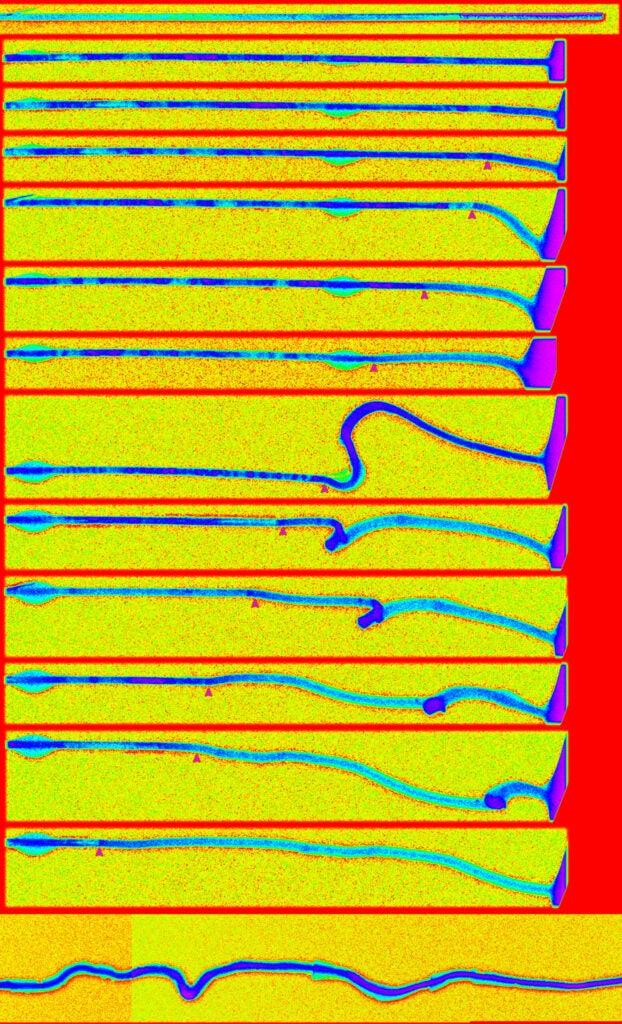 Huang and colleagues were able to measure the wire’s tortuous twisting, noting that it nearly doubled in length during charging — a fairly surprising result. Most battery developers had believed batteries swell across their diameters, not longitudinally, so a better understanding of these stretchy processes could help avoid short circuits.

The work is a testimony to the power of direct observation, said MIT materials scientist Yet-Ming Chiang in a perspective article accompanying the study.

“The results should stimulate others to consider analogous experiments and mechanisms in other storage materials, and should contribute to the design of nanoscale electrodes that fully exploit the potential of ultrahigh-capacity storage materials,” Chiang wrote.

Watch the battery’s growing pains below.