The idea of moving objects with light is not a new one. Solar sails, such as those used by Japan’s... 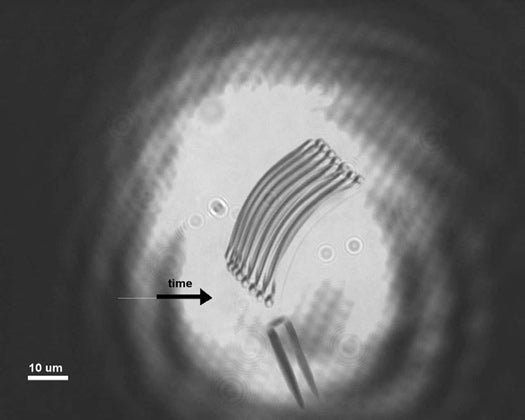 The idea of moving objects with light is not a new one. Solar sails, such as those used by Japan’s IKAROS spacecraft, harness the sun’s radiation for propulsion. But researchers at the Rochester Institute of Technology have shown that light can also generate the much more complex force known as lift – the same force that allows airplanes’ wings to hoist them aloft as they move through the air.

Lift occurs when a push in one direction causes an object to move perpendicularly to that push. In the new lightfoil, light takes the place of the typical air or water to create that flow on a small scale. The team, led by Grover Swartzlander, fashioned micro-rods in the shape of an airplane wing (one side flat, one side rounded) and submerged them in water. Then they shot these lightfoils with 130 milliwatts of light, creating, for the first time optical lift. The rods moved up and to the side, as can be seen in the video below.

Compared with aerodynamic lift created by airfoils, this optical lift has an extremely steep angle – about 60 degrees. Light is refracted differently within the rod depending on its point of entry, and the bending of the beam causes lift.

While optical lift probably isn’t going to be used to fly 747s anytime soon, it could prove useful in powering micromachines or transporting nanoparticles. Swartzlander says he also believes that optical lift could be used to steer solar-sail-powered craft like IKAROS, which currently can only move straight in the direction the sun pushes it, and requires external forces, like jets of gas, to change direction.