Gray Matter: The Line of Fire

My brave volunteers get a flaming handful of bubbles 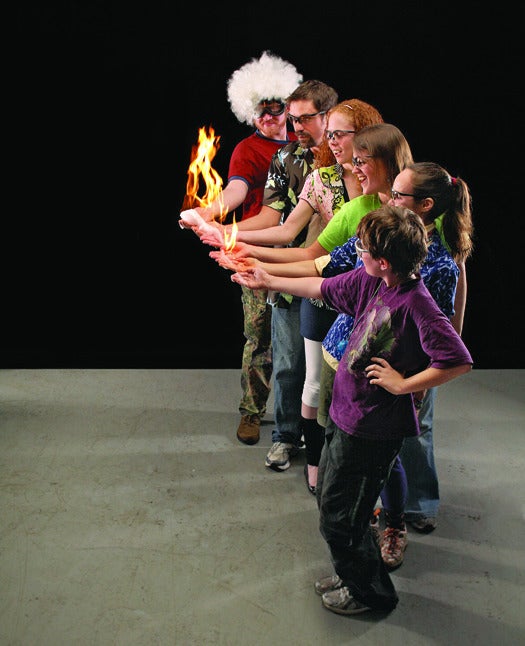 To achieve this effect, I filled a long plastic sleeve about three quarters full of butane and the rest of the way with hydrogen. Measuring the length of the filled part of the tube allowed me to accurately determine the ratio of gases. Mike Walker
SHARE

Last month I promised I would re-create some demonstrations I recently did on a Japanese TV show. First up, fire bubbles! The setup was very simple: Get a bunch of minor Japanese celebrities to line up with their hands outstretched holding a line of bubbles and then light the bubbles on fire.

There was an easy part and a hard part to redoing it in Illinois. Flammable bubbles? Easy. We took soapy water and piped in a mix of butane and hydrogen, which reacts with the oxygen in the air to make for a good display. The more hydrogen, the faster it burns; about one-quarter hydrogen worked best. The hard part was finding minor Japanese celebrities willing to have their hands set on fire. In the end I had to use employees of my software company instead, plus an assortment of my son’s friends.

Why, you might ask, would anyone want to do this demonstration? Well, on the show there was one other factor I haven’t mentioned yet. The poor guy at the end was secretly given a special mixture of pure hydrogen and oxygen gases, which exploded with a bang when the fire reached him. The shock that resulted was perfect for the weird world of Japanese TV, where practical jokes go way beyond what the lawyers would allow here. It was pretty funny to see the look on all their faces when they realized they’d just been had by a crazy American.

But exploding bubbles are actually quite dangerous. Get the mixture or quantity wrong, and injury is much more likely than with bubbles that just burn gently. So for this article, we didn’t do that part. Fortunately, the lack of a bang at the end was more than made up for by the privilege of watching my son during the setup follow in my footsteps by trying to see how many bubbles he could light on his hand without burning himself.

WARNING! Do not try this demonstration yourself. It’s fire, and it’s on your hand, and it’s tremendously easy to burn yourself or set something on fire.