Video: Echolocation Tricks Bats Into Trying to Drink from Sheets of Metal

Coming on the heels of the 40th annual National Symposium on Bat Research is this amazing video from Nature demonstrating... 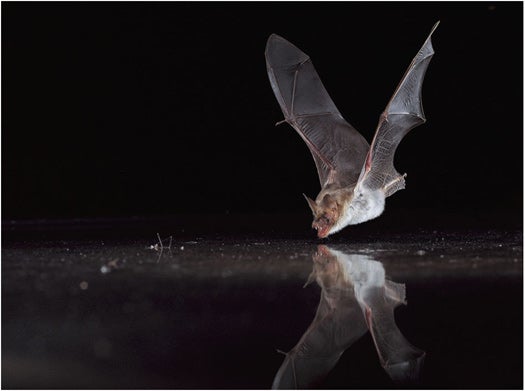 Coming on the heels of the 40th annual National Symposium on Bat Research is this amazing video from Nature demonstrating how bats use echolocation to find bodies of water. PopSci has seen a lot of depressing research about the state of our winged mammal brethren over the course of our time at the symposium, so a breakthrough like this is refreshing, exciting and right in line with next year’s Year of the Bat.

While scientists have understood for some time how bats use echolocation to find insects, this study by Stefan Greif and Björn Siemers of the Max Planck Institute for Ornithology suggests that bats rely more on echolocation to assess their environment than other senses.

Both captured wild bats and juvenile bats that had never previously encountered large bodies of water were placed in a room with smooth and textured wood, metal and plastic plates. Bats of all species repeatedly attempted to drink from the smooth plates, but never from the textured plates. This is because the smooth plates replicate the mirror-like echo reflection exhibited by bodies of water. Such surfaces reflect most of the bats’ echolocation energy away from it, but some energy hits the surface perpendicularly, sending an echo back directly beneath the bat. Water is the only such surface that behaves this way found in nature, so when the bats encountered similar properties in this artificial environment, they assumed the smooth plates were water.

In some tests, bats would try to drink from the smooth plates even after having accidentally landed on them shortly before. Seemingly, the echolocation instinct overrode the tactile information that the object was not, in fact, water.

Check out the bats in action below: