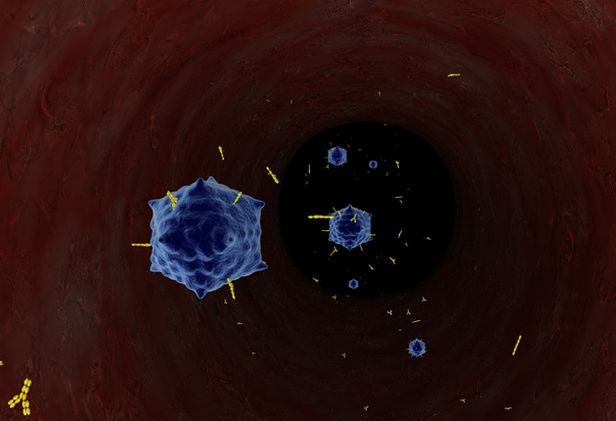 Virus (purple) circulating in the bloodstream recognised by antibodies (yellow) of the immune system. The Independent
SHARE

Any immunology textbook will tell you that once a virus enters a cell, the only way to knock that virus out is to kill the entire cell. But a new study from the Laboratory of Molecular Biology at Cambridge has shown a way to kill a virus from within the cell, leaving the virus defeated and the cell victorious and intact. This could be huge–not just a cure for the common cold, but for all kinds of other viruses as well.

The study, which will be published this week in the Proceedings of the National Academy of Sciences, tackles a fundamental of immunology. It has long been assumed that the body’s last chance to eliminate a virus is before it enters a cell–once it’s inside, it’s game over. You can kill the cell, but doing that too often is harmful to the body’s health. But this new study shows that the body actually has its own in-cell defense mechanism that can attack viruses once they’ve entered a cell–and they’re hopeful that this defense mechanism can be enhanced through external means, making the cells even stronger.

Antibodies in the bloodstream attach themselves to free-floating viruses, and are taken intact with the virus once it enters into a cell. Before that virus gets a chance to hijack the cell, a naturally occurring protein called TRIM21 recognizes the antibody, and further notices that there’s an interloper (the virus) attached to it–which, according to the strict bouncer-like rules of the TRIM21 protein, is not allowed. (Antibodies can’t roll one-virus deep, is what I’m saying.) The TRIM21 protein then triggers the cell’s defense mechanisms, which can destroy the virus in as little as one or two hours–long before the virus has a chance to take over the cell.

The research further speculates that that TRIM21 protein could be used as a sort of booster shot, perhaps delivered through a nasal spray (we do love inhalable medicine). The scientists have only experimented on cultured human cells, not whole animals, but are very confident that this kind of medicine could boost the cells’ own defenses and give them the ability to kill viruses even after they’ve entered the cell. Assisting the cell’s natural defenses allows the cell to remain functional after it’s destroyed a virus–the best kind of medicine.

These scientists believe that this sort of cure could be ready to go to clinical testing in as few as two to five years–not soon enough to stop the onset-of-winter colds we’re all about to contract, but encouragingly soon nonetheless.