The Deep Impact probe, part of NASA’s EPOXI mission, has successfully returned never-before-seen images of the comet Hartley 2 as... 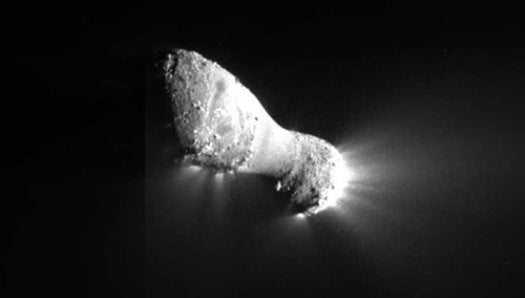 The Deep Impact probe, part of NASA’s EPOXI mission, has successfully returned never-before-seen images of the comet Hartley 2 as it flew near Earth this morning, only the fifth comet nucleus ever visited by a spacecraft.

Less than half an hour after the probe reached its closest distance from the comet, about 435 miles away, a series of images completed the 23-million-mile trip from EPOXI’s spacecraft to computer screens in NASA’s Jet Propulsion Laboratory.

Almost an hour after they were taken, Deep Impact returned its most close-up images to astronomers, capturing the comet when it was 496,000 miles from Earth.

To accommodate the unpredictable flight pattern of Hartley 2, engineers switched the Deep Impact to autopilot, or AutoNav, allowing the probe to steer itself towards the brightest object (other than the sun) in its sight.

Deep Impact is the first spacecraft ever to visit two comets, and the close-up images of Hartley 2’s nucleus were a long shot–EPOXI flight director Rich Rieber said the mission had a 0.1 percent chance of success, and attributed the accomplishment largely to AutoNav’s precision.

The full series of images is available on JPL’s website, and a post-encounter press conference will be streamed live at 4 p.m. EST.