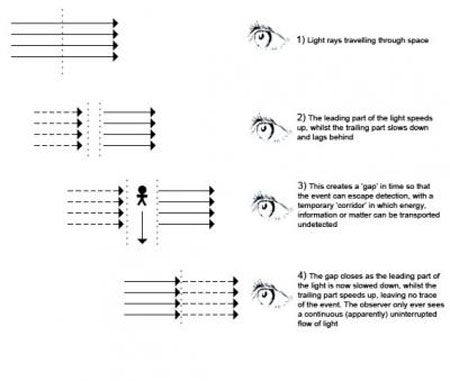 Forget invisibility cloaks. Researchers at Imperial College London have demonstrated – on paper, anyhow – a metamaterial “space-time cloak” that can conceal entire events from view, making a viewer see one thing while something entirely different takes place behind the cloak. Paging DARPA.

Just as metamaterial “invisibility cloaks” manipulate photons to conceal their subjects or otherwise change visual perception of an object, a space-time cloak would rely on light manipulation to achieve its aims. But unlike other metamaterials, which bend light around an object to render it invisible in certain wavelengths, the space-time material would accelerate and slow photons to create gaps in visual time.

To borrow an analogy from one of the researchers on the project, think of the photons like steady traffic flowing down a freeway. You want to create space to cross the freeway, so you accelerate the traffic. Simultaneously, you slow all the traffic beyond a certain point on the freeway and decelerate all the traffic approaching that point to create a space between the accelerating and decelerating segments of traffic.

A space-time cloak would do this with protons, accelerating some, decelerating others, and essentially editing out some in the middle. As such, someone could – and this is an example rather than a suggestion – fool a security camera buy manipulating the photons that reach it. Ostensibly, a safecracker could set up a space-time cloaking device, enter a room, empty the safe, close the door, and make his or her grand escape while a security camera fixed on the safe would see nothing but the closed safe. (You know, like the camera looping scene from Speed, except slightly more believable.)

But the technology doesn’t just serve to enhance the lives of career jewel thieves. This kind of optical manipulation could enhance signal processing and optical computing techniques. And who knows, if someone were to spend some time thinking about it there might be a defense application or two for such technology as well.